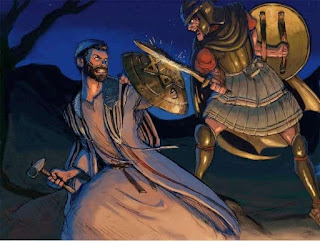 So here's a little Hannuka themed game, born while sitting around a table at a Hannuka-themed Bat-Mitzva party with members of my gaming group. It's inspired from Steve Jackson's Zombie Dice. It makes for a light holiday-themed party game.

You are Macabees, resisting the Greek(Seleucid) conquerors. Each time you roll the dice, you go to battle!

You will need a pile of 8-10 dreidels, and a writing implement/smartphone to track everyone's score.

Whoever gets to 8 points first wins!

Turns go around the table. On your turn, roll 3 dreidels like dice, representing the next 3 Greek warriors facing you!

Put your points on one side, and the hits against you on the other. The Nuns go back in your hand. If your opponents score 2 hits on you, your turn ends and you lose any points you gained this turn!

If you survived your first turn, you must choose to either

You can choose to keep pressing your luck and Continue Fighting until you win with 8 total points or you get two hits against you, in which case you lose any points scored this turn. My personal advice- quit while you're ahead! Remember, the real Maccabees won with Guerilla tactics!

Have a happy holiday and don't eat too many Sufganiot!
Posted by Nadav at 22:52 No comments:

Email ThisBlogThis!Share to TwitterShare to FacebookShare to Pinterest
Labels: GamesForKids


January 18th, following up on last session, the party decided to give a second look at the artifacts they got from the cultists.

Mike was brave and decided to try on the High Priest's garments. Upon putting on the Wooden Mask, his pupils grew and he fell down with a sort of seizure. He had a vision of Yog-Sogothoth which left him shaken with horrible knowledge. The only thing that saved his sanity was Dr. Von Flue's immediate ministrations. He was left with psychosomatic limb loss effecting his trigger fingers for the next couple months.

Besides that, they figured out that the copper bowl is used for a Send Dreams ritual, and the sceptre is a sort of magic-enhancing wand.

On the 19th the investigators took a couple taxicabs to Evergreens Cemetery in Brooklyn for Elias' funeral. All of New York's upper crust had turned out to see off the best-selling author.

Lietenant Poole met them and told them to keep a look out and perhaps go out of town for a while. Some nasty people are looking for them, perhaps in connection to something belonging to the cultists.

A blonde reporter asked Mike to meet later in a local Tea Room and he assented.

The party noticed some cultists spying on them. They shot up their car, making a big scene at the funeral, but the cultists got away.

Dr. Bedford tried shooting a gravedigger so he could reanimate Elias' corpse but ended up getting murdered by a cultist.

The party recouped and drove to the Tea Room to await the rendezvous with the blonde reporter. She ended up sweet-talking Mike and getting all the juicy gossip about the Elias murder.

On the 20th, the party found Mike and Gretta's photos on the front page of the New York Times. A rather embellished account of the party's misadventures was included. Now the cultists know who they are!

They visited Jonah Kensington, publisher of the late Jackson Elias. Jonah shared a note from Elias as well as some of his notes: 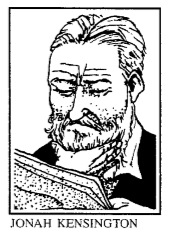 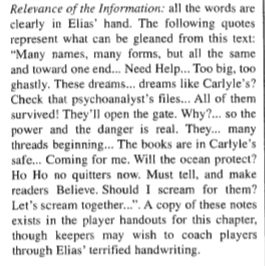 The party spend the rest of the day preparing for their voyage to Southampton tomorrow
Posted by Nadav at 10:24 No comments: