Planescape Session 5: the Maze of the Melancholy Minotaur

I missed session 4, so this summary follows Session 3.

In previous sessions, the party met a group of Thri-Kreen from the planet Athas. They were in search of a particular botanically-skilled Sensate in the hope that she might help them replenish their magic-ravaged desert planet.

The search for the sensate led them to the gallery of wizards, an art gallery specializing in portraits of powerful mages. The party's visit follows a theft of several paintings in which painting-portals malfunctioned, a sensate disappeared, and a painting of an imprisoned god was vandalized.

This led them into a painting containing a magic labyrinth with a magic healing fountain. 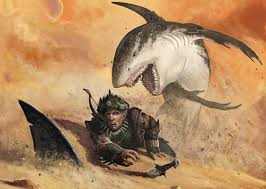 In session 5, we continued to search the maze by the guidance of our four-hoofed colleague. The dwarf barbarian took a piss into what turned out to be a Land Shark's lair(IMHO the DM missed a perfect opportunity to roll on the limb-loss table). The party defeated a Land Shark with the help of a firebolt and Cardinal Sardinius' net, and found the art-thief he had devoured, along with the stolen Wizard portraits.

Ultimately we came upon a strange scene: a sensuously dressed woman, rooted to the ground, staring-down an immobilized Minotaur. 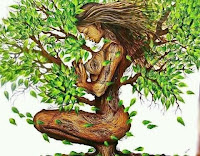 After charming the beast and watering the lady(this time with water- what did you think, you perverts?) she awoke and accepted the mission to revitalize Athas. We left the maze escorted by the Minotaur, returned the paintings to the gallery owner(for a humble 1000GP reward) and headed out to meet our Thri-Kreen sponsors.
Posted by Billy at 22:42 No comments: