I've been thinking a lot about how run a mystery game.  When I ran Polish Resistance, there was a lot of mystery and intrigue around the cause of the zombie outbreak.  But that was in the background--there was a lot of other stuff to do, that had to be done, related to everyday survival.  That kept most of the sessions exciting, but not due so much to the mystery. 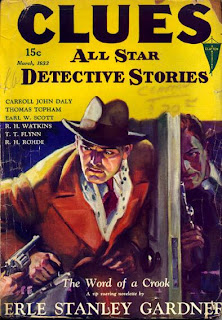 On the other hand, the Shadows over Bogenhaffen campaign I'm playing in is starting-off really slow.  There's been only a single combat so far over 4 sessions.  Mostly it's talking to people, each of them with their own angle, and trying to figure out what's going on.  So here the mystery is at the center, but it's a bit boring.

So are mystery games inherently boring(at least to my gaming group)?  I don't think so.  I think that one issue is the pacing.  When a mystery is spread over many sessions, so the individual sessions don't feel rewarding.  At the end of the session, the players don't feel like they've accomplished anything.  On the other hand, if there are shorter-term goals being accomplished, then it's okay that I didn't solve the mystery yet.

But I've been thinking about a third option: short mysteries that can be completed in a single session.  Or an overarching mystery with smaller, somewhat self-contained parts.  That way the game can be about the mystery, but the pacing won't be too slow.  I'm still not sure how to incorporate this into an existing RPG, so here's a stand-alone game I came up with as a first step.  You can think of this as Hardboiled Clue.


Since the DM will have to improvise a lot, it might be helpful to prepare with a bit of setting info.  For myself, this would mean making a short list of NPC names and descriptions, as well as a few locations around town.  This list will likely need to expand during gameplay.

The game begins with the DM rolling up some of the facts of the mystery.  He will have to improvise the details himself over the course of the game.


Who got Killed and Who did it(2 rolls):

Did they do something to Avoid Getting Caught?

Start out by rolling up the Hook on the table below.  Then describe to the players how their characters are introduced to the mystery.  The Hook might be only given to one character, who then calls his buddies for backup.  The PCs can turn down a mystery they aren't interested in.


Mystery Hooks(How the PCs find out about the case)


As with running an RPG Adventure Sandbox, the goal here isn't to lead the PCs through a predetermined list of scenes in sequence.  It's also not to pre-determine a list of events at specific times/places for the PCs to discover, as in Shadows Over Bogenhaffen.  Rather, it's to get the players to come up with intelligent and unique ideas of how to investigate and to shape the facts around that.

This is so that the game will be about creative problem solving, rather than the often aggravating "guess what I'm thinking".

As such, if the players decide to investigate a location, there should be some sort of clue or relevant character there.  But the characters will need to discover it either by player skill or character ability checks.

You can invent a clue that makes sense for the location or you can use a clue generator to determine what clue will be available at a given location.

When PCs want to perform an action that requires skill(combat, find clues, interrogate an NPC, dive to avoid a bullet...) then should roll a D6.  Results are as per Ghost Echo:
PCs performing an action for which their profession gives them an advantage(PI searching for clues, Cop shooting, Boxer punching) can roll two dice and take the highest value.  Very difficult checks can similarly use two dice, taking the lowest value.

Players should keep track of significant NPCs and Venues, which may help them in future mysteries.  Similarly the GM should write down material that he may re-use.

And one more for the road...