Well, A is planning to run a 5e Planescape campaign for us. He got five of us together last night to create characters. One of the new players in our group summed up that session as follows: 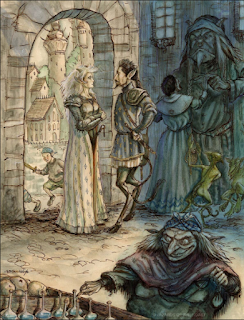 So my character rocks. I told my wife last night yeah so im half devil spawn that plays a flute and molts skin and believes in reincarnation. Theres a man with a fish head who gets powers from his god chatulu. Theres a horse with a womans upper torso and ram horns who as a monk partcularly finds peace of mind and meditates in the middle of battle and chaos. Then there is a cubic shaped fighting macine thats animated and loves to slash his flesh and others and watch the decay . Oh then there is just a plain old elvish wizard who aspires to cast fireballs for breakfast lunch and dinner and she was like gaping in shock. Id have to say its an ecclectic party.


It is a rather rag-tag bunch. I think there is something about the Planescape setting that really brings out the gonzo in people.

As for my character, I am the fish-headed lad:

Sardinius is a Kuo Toa agent living in Sigil. As a particularly talented young acolyte among his race, he was selected to dwell amidst the planar nexus to help further the ultimate mission to return Great Cthulhu to the Prime Material Plane. Since the performance of the great ritual that sent him to Sigil, he is occasionally called upon by the Kuo Toa clergy to perform minor tasks. Most of the time, however, he is left to fend for himself. He sustains himself by working for the Xaositects, acting as a guide for visiting Chaotic Primers. He occasionally double-crosses them for the loot. He has become cynical with the passage of time and his long absence from the city under the waves, but deep down he is still a true believer. He would love an excuse to visit the elemental plane of water.