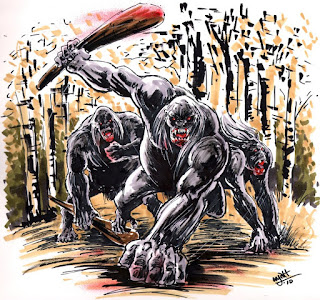 This session picked up where Session 2 left off, with the party in dire straits. Deep in the dungeon, Giant Killer Monkeys finished off Frog and Toad and the rest of the party barely escaped with their lives. The survivors decided to make a hasty exit and rest up in the forest. But first, the lineup:


They made their way back up the stairs, avoided a Bugbear, and rappelled right back out the tower window. They then mounted up and rode deep into the forest to rest up.


The first afternoon of resting, the party heard voices. Lavi snuck into the brush to investigate. Two evil priests were walking along a game path towards the Palace, discussing the success of the goblinoid invasion of Gulluvia. The party ambushed them. Melech Yisrael's Charm Person spell failed, as did Lavi's backstab, but the party still managed to overwhelm the surprised clerics.

Their rest continued undisturbed a couple days longer. That said, they only have a few more days of rations before they'll need to resupply...


Upon returning to the palace, the party decided to try entering via the main entrance with it's raised portcullis. Together they managed to lift all the barriers and they chose the branch ahead and to the right. They debated whether to leave their horses outside to graze or bring them in, ultimately opting for the latter approach this time.

The party searched room by room, hoping to discover the legendary gem, My Lady's Heart. Instead they found rotting food, filthy dishes, and a carrion crawler. Their search didn't go entirely unrewarded, though, as they found 3 GP of a strange old coinage and a wand of Detect Secret Doors.

We ended the session there, but The Campaign will continue next time...