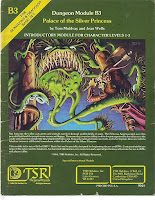 Here are some influences to draw on for world building:
Posted by Billy at 04:39