Should Players Know the Rules?

So, last session, I had difficult GMing moment.  I stat up my own monsters, even ones which WFRP has stats for.  There are a number of reasons I do this:

Anyway, the character failed his poison save, despite being a tough Dwarf.  I gave the Herbalist a check to see if she could improvise an antidote on the spot, which she also failed.  So I said, "Sorry, you're dead--better use a Fate Point."

What followed was 10 minutes of rules debate, which concluded with the player looking up the WFRP stats for Giant Scorpion(which I wasn't using) and pointing out that it says the first dose doesn't kill.  I gave-in to this argument.

Now I think that's fair. I'm willing to be flexible, within-reason, about the rules.  Especially in a rotating-DM game such as this one.  But I still wasn't happy with the result, which detracts from the sort of atmosphere of tension and terror I'm trying to create.

At that moment, I suddenly felt that I understood noisms's recent lament about GM authority as an enabler for art.  Now I know why he likes to run homebrew systems like Pendragon-Mechwarrior, or WWII CP2020.  Because when the players don't know the rules, and by-definition can't look them up, since there is no authoritative text, then the GM has a greater freedom to craft a truly-unique game-world.

Anyway, having made that point, let's wrap this post up with a foil.  WFRP 2e gives 5 "Golden Rules of GMing".  Here are two relevant ones, which are often at odds with one another.  "Lay down the law" is about giving the GM the authority to do his job well.  "Give them a chance" is about giving players the freedom to experience real agency and thus feel invested in the game. 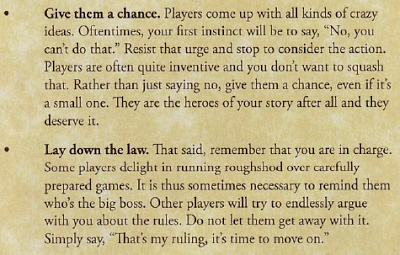