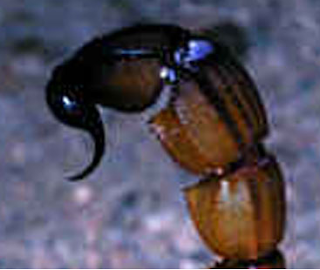 Session 4 picked up where Session 3 left-off: with the division of loot from the Beastman and Mutants.

The party then fortified an unused room on the second floor of the manse for a much needed rest, with The Trapper left on guard.  While up in the tower, he saw some many-legged creatures approaching the broken but barricaded back-door in the dark.  He shot an arrow at them, then woke-up the rest of the party.

What followed was a battle with a trio of Giant Scorpions in the narrow kitchen.  The party killed the monsters, but Grim got stung and there were some tense moments as he slumped to the ground and stopped breathing.  But the tough dwarf survived.

The next morning, the party searched the house systematically, declining to rob the owners, but breaking into any closed doors and finding an old rotting grimoire in the musty old library.

They then went on to explore the cellar, finding a path, apparently made by the feet of the "Metal Men", leading to a large trap door in the floor.

It was a short session via hangout, and we left-off there.
Posted by Billy at 03:39