All this talk about PC death and how players take it got me thinking about a Role-Playing Game's endgame.  How a player relates to the death of their character is closely tied to what they see as their goal in the game. 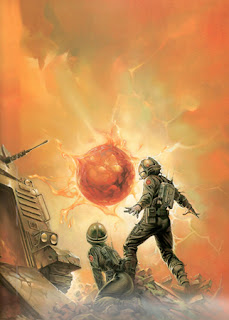 Many players see their main goal as being to amass power for their character.  This takes the form of game-mechanic bonuses, wealth, and political power within the game world.  Winning at DnD means powering-up your character.

To a player with this approach, character death is devastating.  When their PC dies, they must essentially start from scratch.  It's no wonder that so many rules(conveniently listed here) have been used to prevent PC death or at least soften the blow.


In this mode of play, the player doesn't concern himself with long term in-game goals(though the PC may, of course).  Instead the player's main focus is on the experience of the current session.  To wander Hyperborea like Conan, or survive by the seat of his pants like Cugel, for a few short hours.

To this player, PC death is, at worst, a minor setback.  A new character can be rolled-up and the fun can continue.  In some cases, character death can even be the ultimate victory(as was the case with Amaruq), more worthy than collecting some arbitrary number of experience points.

In fact, it's the very fact that the game allows him to play dice with death, that this player loves about RPGs.  The chance that the Rust Monster may eat his magic sword is terrifying, but that's part of the excitement of the game and even if it actually does eat his sword it's not going to ruin the player's day.

Why I'm an Experiential Player

As I mention in the title, I, for the most part, fall into the Experiential box. One could definitely argue that DnD takes the Power-Accumulation approach.  The most obvious proof of this is ODnD's Endgame, where the PC establishes their own Barony and becomes a petty lord(although Delta claims that it never really existed).  Another proof is the publication of rules for ever-higher levels, ending with the Immortal Rules.  The implicit goal is that players will want to keep levelling-up their character until they reach "Immortality".  That's fair enough.  I accept that DnD has a well established tradition of Power-Acquisition Play. But now, as I get older, having a character who reached level whatever just doesn't seem so important.  I don't play to gain a sense of accomplishment.  I play to have adventures, to solve puzzles, and to just plain have fun with my friends. One could argue that levels don't interest me that much because I don't play often enough to really advance a PC that far.  That may be true.  But I think it's more than that.  RPG's are different than traditional games.  They are, by nature, an open-ended sort of game--not having a defined goal or a natural end.  Maybe, as wargamers, Gygax and Arneson felt the need to define a winning-condition for the game.  For my part, I'm happy to live in the moment and enjoy each session in it's own right.
Posted by Billy at 23:35