Hazards in Subterranean Waterlogged Bases of a Lost Race 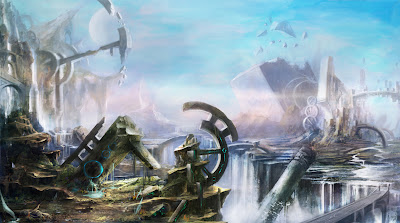 This is part of my prep for a scenario I may run.  It's in a waterlogged, subterranean complex, half eaten-away and full of ancient technology.  The idea is that, in addition to any inhabitants, there are environmental hazards to be dealt with.

This is meant as a setting-appropriate alternative to traps, since this particular location lacks mischievous hobgoblins, insane wizards or any other groups who might set intentional traps to catch unlucky adventurers.


The water-flooded floor in certain rooms/corridors often conceal pits and sinkholes.  The depth of said pits may vary from a few feet to an entire submerged cavern.  Unwary characters have a good chance of falling in.  The result is that the character an all their equipment is soaked until it can be dried.  Rations, paper, are ruined.  Torches are temporarily unusable, etc.  Characters who are heavily encumbered or who don't know how to swim may drown.


Opening stuck doors can be hazardous.  If the room on the other side is flooded, the unwary opener may be struck as the door is smashed outwards, and may even take a second impact on the opposite wall.  As with the previous entry, all equipment is soaked.

Additionally, combat near such technology is itself hazardous.  A stray blow has a chance of breaking or activating nearby any screens, control panels, computers nearby.


The rotten structure of the place means that trying to force a door, or a stray blow in combat have a chance of resulting in unintended consequences.  This could mean causing a collapse, or bursting a high-pressure pipe.
Posted by Billy at 03:49