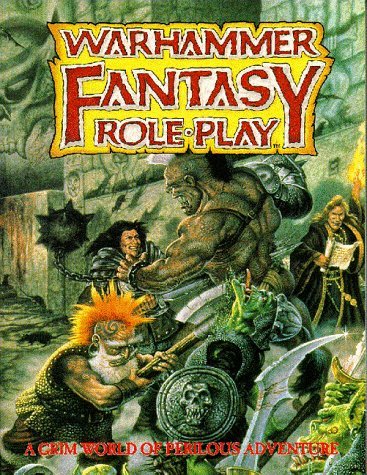 Well Seigwart got to play in his first WFRP 1e session.  His fellow party-members were an Elven Noble and his bodyguard, a Dwarf warrior.  Seigwart was their streetsmart guide to the ins and outs of the city.

The mission: retrieve some chaos-tainted artifact from the thieves who stole it for a local Oligarch, but then refused to deliver it.  The party quickly located the gang's lair, but then found that the entire gang had been savagely murdered by a rival gang, and the artifact was gone.  This segment didn't yield much for the party, except information and a few still-usable crossbow bolts.  But the tone, of brutal, no quarter-given, gang warfare, really set the tone for what was to follow.

The party proceeded to the rival gang's headquarters and succeeded in gaining entry, by impersonating some new hires of that gang.  But then, when the 3 guardsmen went back to their dice game, the party decided that we couldn't afford to leave these guards at our flank.  Seigwart, blocked the door while the other two party members initiated a surprise-attack on the unsuspecting guardsmen.  The quick battle went our way, no thanks to Seigwart's unremarkable martial abilities.  When one guardsman managed to flee past the Bawd, the Noble, despite his ostensibly Good alignment, threw a spear into the fleeing man's back!  And when the final guard surrendered, Siegwart drew his dagger and slit the man's throat, since a prisoner would only hinder our infiltration of the Gang's base.

This episode stood in contradistinction to our previous DnD sessions, where quarter was generally given(at least to Humans) and the unspoken assumption was that "We are the Good Guys".  And I think that it was the tone of the DM's material that made all the difference.  In those games, I was often a Neutral character who "went along" with his good teammates lead.  In this WFRP session, even the "Good" character got swept-up and forgot he's not supposed to just murder anyone that gets in his way!  Atmosphere really matters.
Posted by Billy at 01:02