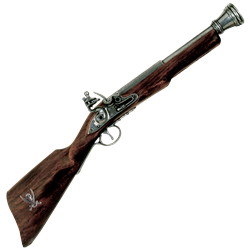 Well, now that I'm making progress on my goal of designing a Pirate Sandbox, I might as well stat-up some small arms, as per my post on the FWT System for DnD.  Note that the damage is calibrated for Labyrinth Lord, where Fighters/Monsters use a d8 hit die.  I decreased the range of the crossbow to bring it in line with Backswords and Bucklers.  That seems OK anyway since we're increasing it's power overall.

For Matchlock versions of the above weapons, a round must be spent before firing, lighting the match.
Note that this effectively adds 1 round to the reload time, for getting of a second shot.
For the first 3 rounds after the match is lit, the weapon can be fired.  After that, the match has gone out and round must be spent putting a new match and lighting it.

Treat as a Matchlock Musket