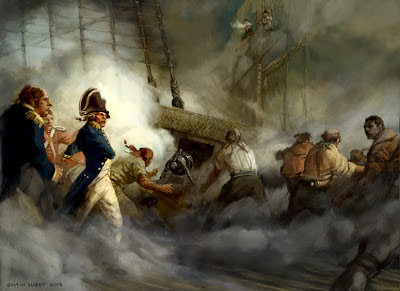 Naval Combat with wind-powered boats is complex.  There are different ships with different capabilities, different manoeuvres that can be done, and wind plays a major role.  Evil Stevie does a good job of capturing the experience while simplifying it somewhat, BUT at the same time I'm looking for something even more simple and, by necessity, abstract. I should also mention that I'm assuming fairly small ships, certainly not 28-gun frigates!

I want to have ship-combat, but at the same time, I don't want to lose focus on the individual party-members' actions.  So combat will have Ship Turns, which last a fixed number of rounds.  Each Ship-Turn the relative position of ships can change for the remainder of the Turn.


In this system, any two ships in a particular action have one of the following relationships to one another:


Additionally, a ship's sailing ability depends on the following statuses:


The Ship Turn lasts 6 combat rounds, but it also has a few other ship-related phases that happen only once per Turn.


For the ship to function, some of it's crew need to be assigned duties.  These duties keep them busy and they will not be able to take other actions during the Combat Rounds.  If they do abandon their posts during the Combat Rounds(by choice or due to injury) then it is considered as if no one was assigned the duty that Ship Turn.  Duties include:


Six consecutive combat rounds.  Each crew members may engage in a number of actions during a round:


After the 6 combat rounds, the gun crews have had time to reload their Heavy Guns. During this phase, the gunners can fire their heavy guns.  Each ship should roll it's initiative as 1d6+Helmsman Skill Bonus to see who shoots first.
Firing Heavy Guns works as follows:
On a hit, depending on where you aimed:


Since ship's manoeuvre slowly, so navigation actions happen once per Ship Turn.  As such, at the beginning of each Ship Turn, the Helmsman of an Able(or Alongside) ship should declare one of the following manoeuvres(usually at the Captain's orders):
Now determine which ships are ENGAGED or ALONGSIDE each other for the next Ship Turn.