Old School Inspiration from The Man Eaters of Tsavo

In DnD, people often talk about sources of inspiration for the DM to craft his gaming world and the adventures therein. A more neglected topic, is the need for Player Inspiration i.e. materials to inspire players in playing their PC. That said, with the trend towards player-led action in general, and sandbox gaming in specific, I think this latter type of inspiration is of growing importance.

So with that in mind, I found some powerful player-inspiration in the appendix of Colonel John Patterson’s “The Man Eaters of Tsavo and Other East African Adventures”(1907). After recounting his many adventures while working as an Engineer building the railroad through the British East African frontier, Patterson begins the book’s appendix with some advice for Europeans organizing a gaming expedition in those territories. This practical guide from another era is fascinating and it looks like something straight out of some alternate player handbook. It gives a good idea of the sort of preparations the party would want to make before an extended search into the unknown, and could easily be used as an adventure hook for an actual RPG scenario set during that time period(perhaps as an alternate beginning for Masks of Nyarlathotep).

The good Colonel begins with the topic of weaponry:


The battery, to be sufficient for all needs, should consist of a .450 express, a .303 sporting rifle, and a 12-bore shot gun; and I should consider 250 rounds of .450 (50 hard and 200 soft), 300 rounds of .303 (100 hard and 200 soft), and 500 12-bore shot cartridges of say, the 6 and 8 sizes, sufficient for a three months' trip. Leather bandoliers to carry 50 each of these different cartridges would also prove very useful.
A couple of hundred rockets of various colours should certainly be taken, as they are invaluable for signalling to and from camp after dark. These can be obtained so as to fire from a 12-bore shot gun or from a short pistol, and some should always be left with the camp neopara (Headman) for use as occasion requires.


He then continues on with other assorted equipment:


The hunter's kit should include a good pith sunhat, a couple of suits of khaki, leather gaiters or a couple of pairs of puttees, wash-leather gloves to protect the hands from the sun, and two pairs of boots with hemp soles; long Norwegian boots will also be found very useful. The usual underclothing worn in England is all that is required if the shooting is to be done in the highlands. A good warm overcoat will be much appreciated up-country in the cool of the evenings, and a light mackintosh for wet weather ought also to be included. For use in rocky or thorny country, a pair of knee and elbow pads will be found invaluable, and those who feel the sun should also provide themselves with a spine-protector. The latter is a most useful article of kit, for although the air may be pretty cool, the sun strikes down very fiercely towards midday. A well-filled medicine chest should of course not be forgotten.
A good field glass, a hunting and skinning knife or two, and a Kodak with about 200 films should also be carried.

This goes on for a while:


As regards camp equipment, all that need be taken out from England are a small double-fly tent, three Jaeger blankets, a collapsible bath, a Wolseley valise, and a good filter; and even these can be obtained just as good locally. Chop boxes (food) and other necessary camp gear should be obtained at Mombasa or Nairobi, where the agents will put up just what is necessary. About a month before sailing from England a letter should be sent to the agents, stating the date of arrival and what porters, etc., will be required. The sportsman will then find everything ready for him, so that an immediate start may be made.


Patterson then gives advice on hirelings, paid in Rupees, of course(all of his Headmen, Gun-Bearers, and many of the workmen throughout the book are actually Indians who come by boat to work in British Africa for extended periods) 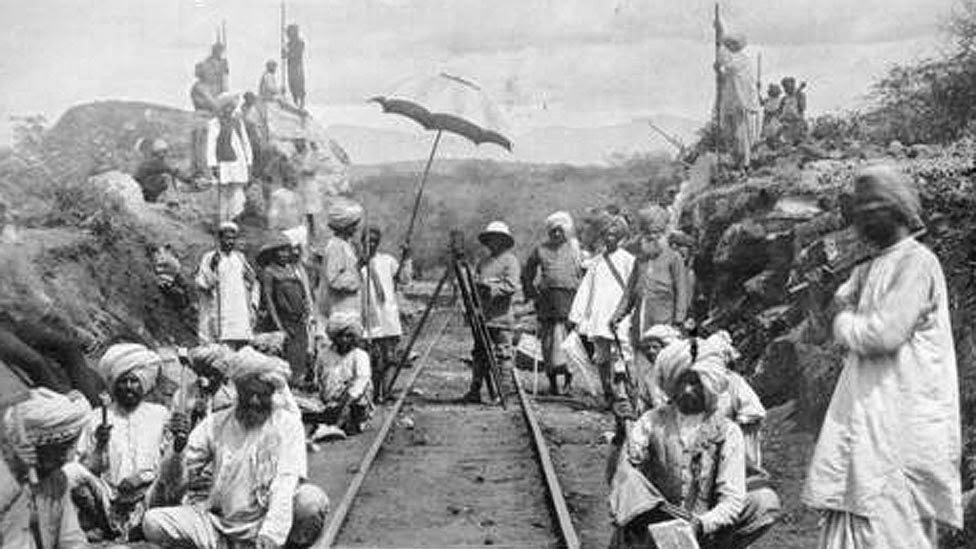 Unless money is no object, I should not advise anyone to engage porters at Mombasa, as equally good men can be obtained at Nairobi, thus saving 20 rupees per head in return railway fares. It must be remembered that for transport work men are infinitely preferable to donkeys, as the latter are exasperatingly slow and troublesome, especially on rough ground or on crossing streams, where every load has to be unpacked, carried over, and then reloaded on the animal's back. The caravan for one sportsman—if he intends going far from the railway—is usually made up as follows, though the exact numbers depend upon many considerations:

He then discusses, at length, wages (half are paid in advance), equipping hirelings, as well as how to pick good men for each role.

The next section is an English translation (from Pakistani) of the epic poem written by one of the workmen, in Patterson’s honor, upon his slaying of the second Man-Eater. The poem is very colorful, but too long to include here in full. One gets the impression that the poem is among the Colonel’s prize “possessions” from his time in Africa, along with the silver bowl his workmen had commissioned for the occasion, the new sub-species of Kudu(T. oryx pattersonianus) that Patterson discovered and was named after him, and of course, his many hunting trophies.

I think there’s a lesson here for both players and DM. “Treasure” doesn’t have to be gold or magic items. Really, it is the adventures themselves that are most valuable. As such, the keepsakes that recall our adventures and the companions we shared them with are the possessions we most prize.

Finally, like the best RPG products, Colonel Patterson finishes his book of with a very game-able map: 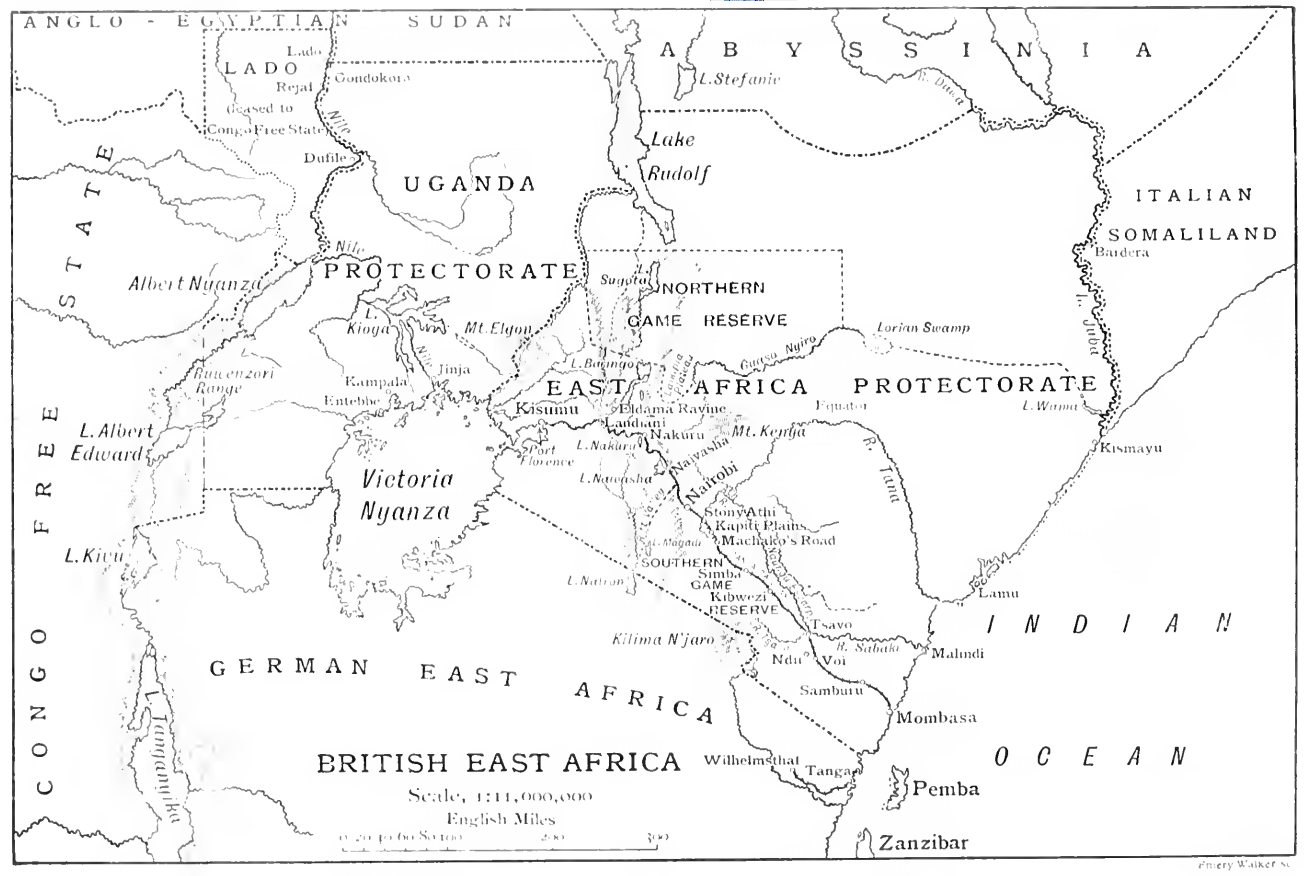 As a final note, I'll just point out that "The Man Eaters of Tsavo" is a great read, especially if you like Edgar Rice Burroughs' fiction. You can get it on project Gutenberg, but I prefer the PDF version which has pictures.
Posted by Billy at 21:47