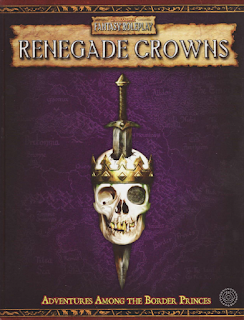 I've just been putting the finishing touches on the WFRP Border Princes sandbox I've been working on (Renegate Crowns really IS the Rolls Royce of Sandbox Generator products).  Our group just wrapped up our latest adventure and it looks like I'll be running the next one.

New Tilia's recent history started only a score of years ago, after reports reached the Empire of settlers there finding gold.  The Gold didn't last, but Silver and Copper have been found in abundance.  Since then there has been a steady influx of prospectors, as well as tradesmen, farmers, mercenaries, and petty criminals, all wanting a piece of the action.  Most of them don't strike it rich, but the stories of the few that do keep the immigrants coming.

Like many of the Border Princes, New Tilia is a dangerous area.  Besides the desperate people, wild animals, and the strange shapes seen prowling the unexplored ruins, there have been numerous problems with roving bands of mutants.  Antonio Calabrese, a Tilian Mercenary, quickly gained dominance among the various gangs offering protection to the locals.  Pretty soon, his was the only gang in town and he founded the Principality of New Tilia, appointing himself "The Boss".

With the competition gone, The Boss got apathetic and  trouble began in New Tilia's somewhat isolated Western province a couple years ago, an area known as Neualtdorf.  A cross-dressing Bandit and his gang began giving the locals a lot of trouble and even collecting protection money.  When The Boss caught wind of this and sent over his men to take care of the upstart, they were ambushed and the bandit declared himself "Viscontess of Neualtdorf".  Since then, the two Principalities have officially been in a state of war, occasionally sending raiding parties on attempts to assassinate one another's leadership.

Besides 21 Towns, Villages, and Interesting Homesteads, the Ruins and Adventuring Locales in and around New Tilia include:
Posted by Billy at 10:47