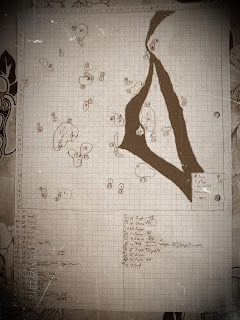 So here's an example of a saltbox created from the toolkit.  The map to the right shows numbered islands on a 36-mile grid, as well as the path of the trade route in dark.  Far to the North the route continues to the New World, while to the south it eventually arrives in the Old World.  PCs can eventually reach those locales, but they will need a big enough ship, as well as a solution to their fugitive status.


The PCs start-off in a rowboat, just East of Island 17(19,27 towards the center of the map).  The nearest settlement there is the Toowakoka Family homestead.  Being on the trade-route, the homestead is a prosperous one and it hosts an irregularly active market.  Here, colonist ships stop to trade weapons and tools for precious metals, animal hides, foodstuffs, and oddities.

To a day's travel to the southeast, on the Western shore of the island is the village of Poodita, from where the Island's chief, Rolla Dolla, rules.  The village is fortified with a tall stockade.  There is a power struggle going on between Chief Rolla Dolla and the village conjurer Zarziban.  Zarziban leads a cell of cultists who would secretly like to summon unholy powers so that he might rule over all the islands.

Poodita's main rivals are on Island 8, a fortified village of islanders under Chief Kowampa who have made a horrible pact with the Mackrelmen.  This tribe also has a homestead on Island 15.  The Mackrelmen's city and main lair is underwater between islands 11 and 12.  The ruin of their ancient fortress is on Island 12, why they no longer go there is a horrible mystery in itself.  Kowampa's people never go on island 10 with it's ruins of an ancient of a settlement founded by Inhuman Things from Another Dimension, now inhabited by a tribe of degenerate islanders.

There are a few other scattered settlements of islanders around.


The Colonist Town of New Madrid is on Island 25(26,8 along the trade route).  The town is quite large, but has begun to deteriorate as the Leaders have made a secret pact with the Mackrelmen, and there is a gang of colonists who have reverted to cannibalism that wanders the streets at night.  There is a very good quality brewry in town, which doesn't help matters.  The town is led by a retired sea captain with a Napolean complex who goes by the title "Master Commander".  Under his influence are two Naval Outposts, a large one on the same island, and a smaller outpost on isle 28 which protects the other branch of the trade-route.  Also, he controls a village on Isle 20.

Reverend Birch saw the moral deterioration of the colony, and founded a break-off settlement on Island 24 to the South.  The village is flourishing there, thanks to a lucrative gold mine and and passing ships do more business there than in the main colony, resulting in both a goldsmith and a market.  The colonists are just finding out that their settlement is not as safe as they had hoped, the island is populated by dinosaurs, including a few very large carnivores.  At the peak of the island is an ancient fortress, built by space aliens.

Island 22 to the South East has a secret settlement of escaped slaves, who took over their ship and beached it on the island.  The village is fortified but primitive due to lack of trade.  They do, however, have a skilled armorer who makes wonders from leather, animal hides, and tortoise shells.

Island 16 is the lair of Captain Ivan the Black and his pirates.  Except Ivan is the only one left.  Perhaps it's due to the Ancient Space Alien settlement on the island and it's horrendous curse.

Besides the things mentioned above, there are a couple other significant locations.