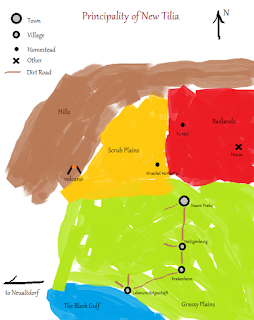 Session 2 was a bit unusual in that a) we couldn't get together in-person the last few weeks since Session 1 so we ran-it on Google+ and b) one of the players joined the session late and the other two left early.  This still managed to work since there was no combat, due to some great sandbox investigation and the DM's complete inability to make a random encounter check until the end of the session. 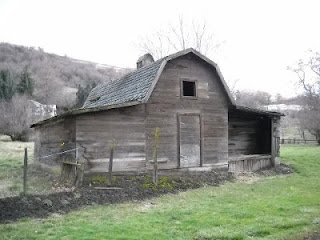 
The party started where they left-off last time, at a homestead in the now on-fire scrub plains.  As the fire raged around them they spoke to Anna Kruekel, a widow, mother of 6.  A number of potential adventure hooks came out of this conversation:


With the Guardian dead, Anna implored the party to go back to Nuova Trantio and beg The Boss to start regular patrols in the area.  The party agreed. 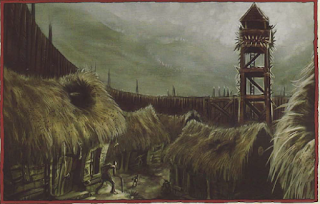 After a day and a half of resting, the party returned to Nuovo Trantio and The Boss' sprawling headquarters.  They charmed his secretary Viola Carmelengo into admitting them before the other petitioners.

The Boss, Antonio Calabrese, is a savy Tilean ex-mercenary.  He was concerned that the Northern border of his realm was in Jeopardy and agreed to start a patrol there.  He offered the party several missions:

The party decided to look for leads around town.  Maria found Messershmidt the Dwarven Gunsmith's assistant, who she had previously stood-up and let him buy her a drink.  He also threw-in a couple free incendiaries.  He described, in glowing terms, the strange metals scavengers occasionally bring him from the Badlands.

Frizband showed Angelica Albert, the pretty Barmaid his dagger and found himself thrown roughly out of the bar.  He then met Lieutenant Leonardo Grande, a New Tilian Noble and commander of the New Tilian army.  Upon hearing the party was heading North he requested any intelligence the party should gain about the Greenskins in the hills.

He also bought a drink for an already inebriated Lennart Korbinian, Bounty Hunter.  Lennart told him about the Northern frontier.  He mentioned a Hostel in the Badlands where the party could stay, but warned him not to trust the owner. 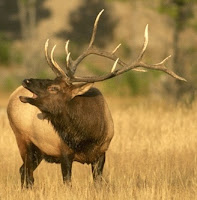 Happenings in the Badlands

The next morning, the party headed for the badlands.  They encountered a large male Elk wandering aimlessly.  The Gamekeeper got the Elk to allow him to approach and determined that the Elk had been poisoned.  He put it out of it's misery and even managed to avoid the thrashing antlers.  He then skinned it and took the skin and antlers. 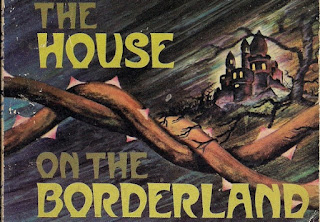 The party continued on until they met a strange sight.  A large Spider, made of a bluish metal, with a body the size of a sheep and 12 long legs approached them quickly.  Frizband cast a speak languages spell and addressed the creature in what sounded to the others like complete gibberish.

The robot identified itself as Scientific Agent 2389693 and stated that it's mission was to collect interesting specimens.  It identified Grim the Pit Fighter as an interesting specimen and requested permission to collect him, which was granted on condition that the party could come with it to it's base.  It agreed, but said it could not guarantee their entry to the base.  It then produced a long metal tentacle and Grim allowed himself to be carried.

The party spent the rest of the day following the robot Eastwards until reaching a large house with a tower and parapets like a castle.  They decided to attack the robot before it could abscond with their Pit Fighter, and the session was ended there so that the other players could participate in the combat.
Posted by Billy at 06:21