Polish Resistance: Behind the Screen 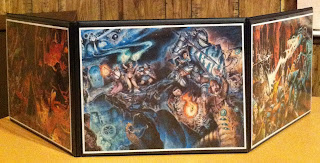 Well, our group has been focusing on our rotating DM-ship WFRP campaign, such that we probably won't be playing Polish Resistance again any time soon.  As such, I've decided to post my notes from the game, to show how I run a sandbox and also in case anyone out there is looking to run a WWII CP2020-based game and is looking for material. So here they are:


These notes grew step-by-step over the 7 sessions, and whenever I had an idea, I added it.  There's a lot more here than I ever used, but I guess that's the thing about world-building: once you get started, it's hard to stop!  My New Tilia notes look similar, though a lot smaller.

Anyway, here are descriptions of the contents, sheet-by-sheet:


Anyway, that's the material I used to run the game, besides a few blog posts which never got copied to the spreadsheet.  I guess I'm a little surprised that you don't see more game products in this sort of format.
Posted by Billy at 22:29