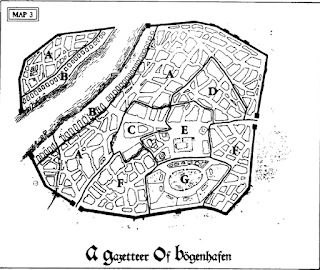 After a few sessions in New Tilia, our rotating-DM WFRP game took a break from the Border Princes and returned to the Empire, specifically to the city of Bogenhaffen.  I'm also summarizing the previous 2 sessions which took place a couple months back.  I mentioned Session 1 here.

(Played in person except that I connected via g+)

Party follows the Goblin through the sewers.  Encounters:

The Demon room had a few interesting features:
The party staked out the location, first hearing a guild thief find the Dwarf's body, then getting a creepy feeling.  Feeling uneasy, 4 party members went to talk to the theives' guild.  They didn't appreciate our entering via the back way, and gave us rough treatment, but they also gave us good info.  We then went to the Inn, Boat, Temple of Morr, Dr. Malthuseus, and Magistrate.  In all, we collected a lot of info: