How Cyberpunk Broke my Scifi Dreams

I just read my way through Mirrorshades: The Cyberpunk Anthology, a 1986 collection of short stories put together by Bruce Sterling.  There are a number of good stories in this collection, but the two William Gibson selections struck me as interesting, because they are two of that author's more explicit "Meta-Commentaries" about the Scifi Genre itself.

"Gernsback" gives us a look at a photographer, working on an assignment for a book on old Retro-Futuristic architecture. The project, and an amphetamine habit, gives him visions of "a kind of alternate America: a 1980's that never happened."

The message of the story is that the old type of Scifi, that of Gernsback's "Wonder Stories", is dead.  The idea that science will bring us Utopian Societies and fulfil all of our Human needs no longer seems plausible.  We've seen technology integrated into our lives, and all the same old problems have remained, just in flashier chromed-out clothes. Gibson is pointing out that that this is the epiphany from which the Cyberpunk genre was born. 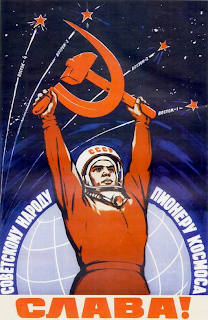 This collaboration between Gibson and Sterling is one of my favourites due to it's tone of fallen majesty.  It's message, delivered through strong symbolism, is largely the same as "Gernsback", though the negative tone of the conclusion has been replaced with a more upbeat one.

The story starts out with Colonel Korolev's Burroughs-esque vision of Mars.  These dreams are interrupted by the unromantic realities of living on a Soviet space station: petty adulteries, smuggling, KGB intrigues, and Labor struggles, mirroring events below on earth, just on a smaller, less significant scale. By the end of the story, the station's mandate is revoked, and the crew abandons ship, leaving Korolev, whose ailing health prevents him from leaving, alone to die on the station with it's deteriorating orbit. In a surprise twist, however, a new generation of space explorers arrives and reclaims the derelict station.  Not government employees, but young privateers with tattoos and "eyes brimming over with a wonderful lunacy".

As for the symbolism: Korolev, an ageing Cosmonaut who bunks in room known sarcastically as the "Museum of the Soviet Triumph in Space" represents the old guard, Classic Scifi Literature.  The new privateers are, or course, the Cyberpunk Authors, here to inject the Scifi genre with new life.  As they say in the story: "We made that jump, and we're here to stay!"

On a More Personal Note...


Today, in the 2010's, the message of "Gernsback" really hits home for me. Science and Technology have brought us significant economic benefits in terms of productivity, as well as all sorts of toys, and...that's sort of it.  Even Pure Science has, to a large degree, reaped all of the low hanging fruits, making real breakthroughs in understanding few and far-between.  Technology is advancing.  In a few years, we'll have medical systems answering questions better than any Human doctor could.  These systems won't be based on any ground-breaking fundamental Medical research, but on better algorithms for search, expert systems, and the efficient operation of the Bioinformatics machine. Certainly those are incredible technologies that will change the world, but isn't there something terribly tragic about a Science that has abandoned the path to greater Human understanding in exchange for fancier tech? Indeed, it seems that the hope that classic Scifi put in Science, in it's ability to elevate and Enlighten Human society, was misplaced.  Where that hope will go, either returning to it's former abode in the Humanities and Religion, or simply dissipating into cynicism and despair, remains to be seen.
Posted by Billy at 23:24