So, I listened to the recording of this game session over the course of a workday.  From what I understand, these guys have a weekly, rotating-DM game of horror one-shots.  Listening to RPG recordings can be pretty tedious, but I think there's value to be gleaned from seeing how other groups do things in-practice.


I really liked how the GM handled agency in what was a pretty tight locational adventure.  He was patient.  When the party wanted to flee the area, even though they were clearly leaving the defined "adventure location" he let them and he improvised.  And he gave them a very good in-character reason to return to the haunted cabin--because the police didn't believe their story and they didn't want to get charged with murder.

This was a surprise to me.  It just goes to show that having a plotted adventure doesn't have to mean taking away player agency, as long as the GM can improvise good, in-character incentives to stay on track.

And it was totally worth staying on track, since the whole thing turned out to be a rather smart quantum physics joke!(which, for some reason the players didn't really seem to get)

Actually, I think the entire 9-11, ambulance, trip back to town, police was improvised on the spot by the GM, so CHEERS TO YOU, DUDE!

So among the players there was some interesting tension here between the "Old School Caution" mindset and the "Naive Victim" mindset.  Sometimes PCs were being super cautious and grabbing any items that weren't bolted down to add to their character sheets.  Other times they were behaving more like in a horror film, where they brush-off the lurking danger and advance regardless.  There were even times when the players were arguing over which of the two approaches to take. 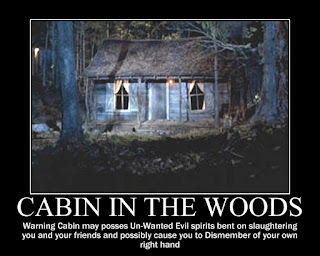 And the game was clearly being run as a Horror Game.  Besides the setting, whenever an NPC would go-off alone, they would turn-up dead(as opposed to the DM running a combat between the NPC and the monster).

The game ended a bit prematurely due to time constraints, but with a presumed TPK.  This demonstrated to me the value of running Horror as a one-shot, where the players aren't going to cry about their Mary Sue character getting killed-off.


At one point they needed to drive and one of the players goes "So... did anyone actually take the driving skill?"  That's why I love the CP2020 system for running contemporary settings--because you have lots of skill points to use on lots of modern-day skills, yet with a very simple to use skill system.