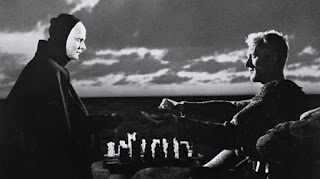 On a recent episode of EconTalk, Bruce Schneier proposed an interesting theory on risk in the modern era.

For many years in our country we have recognized that the price of liberty is the possibility of crime. We deliberately reduce police power because we have a better society because of it, even though the occasional criminal gets through. Those sorts of tradeoffs, those sorts of acceptances, become harder as we live in a world where risk systematically gets removed. Where medical science, where product safety--where all of these things reduce risk, suddenly we look at our residual risk and we are aghast. What do you mean, we haven't fixed terrorism? We have warning signs on ladders, for heaven's sake. Right? We don't allow children to swim in pools unattended any more. We know better. What do you mean we can't fix terrorism? Go fix it. That's a perfectly reasonable reaction in a society that has just gotten rid of risk after risk after risk. Here's another one; just get rid of it. Can't I take a medication to get rid of this risk like I do with all the other ones? We need technology to save us.


Let's assume for the moment that Schneier is correct, and our relationship with risk is distinct from that of previous generations, and is still changing as we speak.  How might this changing outlook be effecting the world of Role Playing Games some 40 years after DnD's invention?  I'd like to suggest two possible directions:


This player is bothered by the "residual risk" is his life and feels that he is constantly playing the proverbial chess game with Fate(if not with Death himself).  For him, gaming is a cathartic experience in that it allows him to live and thrive in a world without these imperfections.  In this world, combat is balanced and  PC death is a rare malady, always proceeded by unconsciousness and possibly 4e style healing surges.

When this player DMs, he likes to run modules with a neatly charted plot and lots of text explaining what to do in each situation.


This player finds the lack of risk in his life droll and uninteresting.  For him, gaming is a cathartic experience in that it allows him to take the risks that modern life doesn't provide him with. The world if full of chances and dangers and sometimes he loses one of his Picaresque Characters and has to start over, but that thrill is what he loves about RPGs.  He may even play a horror game or a DCC funnel where PC deaths are a given.

When he runs a module, it's a chaotic, open-ended sandbox, where anything can happen and often does.

These days, I tend to fall more in the Risk Taking camp, though when I was living through my chaotic teenage years I probably related move to the Risk Aversion perspective.  In any case, both options are certainly out there, proving that once again that there is a high variation in what players want from the game.