Session 6 picked up where Session 5 left off: with Grim, the Dwarven Pitfighter in the Dungeon(J) and the rest of the party at the trapdoor above the subterranean lake(A) trying to get in.  They settled for emptying barrels from the cellar and lowering them down to the lake on a rope, together with the party members, and tying the barrels together while in the water so as not to get separated. 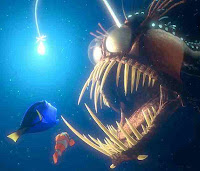 This went well for the first 4 party members, although the mysterious light-globe returned and began floating above party-members' heads on a stalk.  As Frizband the Fabulous was making his descent, one of the elves decided to poke the light globe with his spear.  He made his save so when the Giant Angler Fish snapped, it got his barrel instead of swallowing him whole.

Frizband suddenly saw the rest of the party and their chain of barrels take-off in a North-Westerly direction and he jumped down and managed to catch onto a barrel.  The party was dragged near a small subterranean beach(B) before the Angler released it's prey, leaving 5 of 6 party members floating with 3 barrels.  They managed to paddle back and rejoin Grim on the edge of the lake(J).

The party headed North towards the source of the ankle-high water filling all the tube-like passages.  They explored the rooms in area D, found 4 medium-size crabs, a silver medallion with a sneaking 6-armed figure, an old fishing net, and a storage room full of flat, colored rocks for making mosaics.

They dismantled a blue-metal security door(which one of the Dwarves decided to carry along for the remainder of the adventure) and then ended up in the star-shaped room(H) full of strange control panels.  They killed one of the small humanoid shaped robots there and chased-off the other and then managed to activate the controls, which resulted in a countdown, together with a vibration that turned into a rumbling and shaking coming from the East.  They followed a spiral passage(P), killed a rat-sized creature, collected it's green ichor in bottles, while the rumbling subsided.  Then they found the small robot that had fled and it agreed grudgingly to take them to Mother Brain. 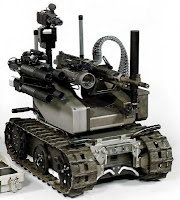 
The robot took them to E(they noticed a smokey smell in the main passages that was not there before) and then ordered a large, intimidating robot to kill the intruders.  The party retreated through the door, which is too small for the large robot to fit through, and it missed a phaser-shot one of the elves.  Now these phasers can use 1, 2, 3, or 4 charges, so their nastiness varies.

The party decided to trace the water to it's source, but then encountered 3 small hovering disk robots with phasers(F).  The party took cover behind the security door and eventually destroyed one disk and chased-off the other two.  However, Maria took a maximum-strength phaser blast which proved fatal validating the age old axiom "Don't bring an axe to a phaser fight."  A fate-point was used and it was decided that she avoided the blast but knocked her head hard and fell unconscious. 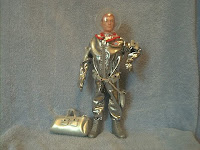 The party found the source of the waters(G) and plugged-up one of the 8 pipes in the floor with the ruin of the disk robot.  They then locked themselves in a secluded room(H) for a full day, under the care of "Drugs" to heal and recuperate, eating crabs when they were hungy.  Upon leaving they found 3 metallic suits with glass helmets.  Two of the dwarves squeezed into one, standing upon one another's shoulders, while Frizband and one of the elves put on the other two.  They found they could breathe despite the suit being sealed.

The party made their way to some sealed rooms, rusty and full of organic muck(I).  They found some sort of organic pod in the muck of the ceiling and decided to take it back to their safe-room(H) to crack it open.  On the way there, they met a hovering metal slab carrying the battered remains of a robot.  The party members recognized it as the remains of the Hooked Lifter they had destroyed last session.

We decided to end the session there.
Posted by Billy at 07:33