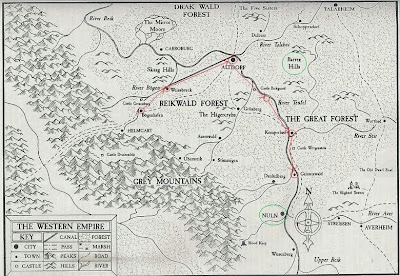 Following up on last session, the party managed to open the door in the floor to the 3rd level of the dungeon(South of Castle Reikgard). Sigyn and the two elves were lowered down(by the Dwarves and Seigwart) and were immediately ambushed by a host of ghouls, who were duly slaughtered by the party, despite being at half-strength.

DM: "OK, I know what I'm going to do next time so the monsters put up more of a fight"

Player: "You said that last time!"


Anyway, the party found the musty remains of an impressive library, including some spells for the magic-user in training, as well as some information that may lead us to another 300-year-old meteor hit.


The party continued South and docked their riverboat at the elevated city of Kemperbad.  They heard a few rumours while hanging around town.  They left with a few bombs, and a new stone-thrower installed on their boat. (Yes, Sigyn finally has enough XP to make the career change to Artillerist, as per her training a few sessions ago.

Drunk on My Power 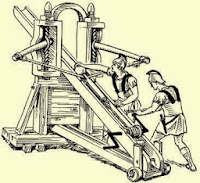 So...funny thing about getting a small siege engine installed on your boat. It has a silly little way of changing your perspective on things. You suddenly find yourself, at every junction, asking:

Can my siege engine solve this problem?

And in the case of a negative response, the questions becomes:


OK, but can my siege engine improve the situation?

Which devolves further, with terrifying speed, to:


How much trouble will I get in if I fire my siege engine at that thing?

So, upon finding a surgically altered mutant corpse floating in the water and then passing the very disreputable Castle Wittgenstein, Sigyn convinced the party that we should check the place out discreetly. It was a tough sell, but the others eventually came around. At which point she started taking pot shots at the rather ill-maintained battlements, as the rest of the party, and the guards at Castle Wittgenstein, looked on in astonishment.

The party decided it might be time to move on, when the castle guard woke up and began returning fire with huge pieces of masonry.

I Vant to Suck Your Blood 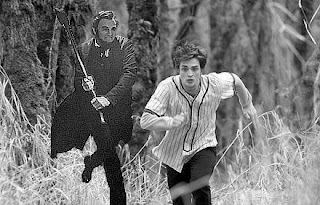 The party was flagged down by another riverboat that came limping down the river. After Sigyn was persuaded to hold fire for the moment, the party parleyed with the captain. They had a couple sick crew-members and "Drugs" the party's doctor was sent on-board the other ship. The diagnosis was "vampires" and the ship's cargo was checked, the vampire incapacitated, and the ship towed and delivered to the Temple of Mor in Grissenwald. We may try to follow-up on where the vampire came from at a later session.
Posted by Billy at 05:05