The Relative Popularity of Various Classic DnD Clones in the OSR

Following-up on a recent post about the Google+ followings of various DnD Clones, I put together a little survey which I posted on Google+ in communities popular with OSR adherents.  One of the problems with simply counting the number of Community Members to determine popularity is that membership doesn't necessarily mean that you play the game, or even that you have ever played it.

So to restate the question:

Which Retro Clones of DnD are being actively used by the most people to play games?

And let's define Retro Clones for the present as being recent RPGs based heavily on DnD 2nd Edition or earlier.


As for the survey, I asked:


In the last calendar year, what Flavours of DnD have you actually played/run?

People could select multiple answers, so the numbers add up to more than 100%.  The answers I got were:


So in answer to the question about the most-played DnD Retro Clones in the OSR, let's filter out all the brand name DnD, as well as anything based on later iterations of the game:

So DCC, LL, S&W, and LotFP seem to be the Big 4, but with a lot of other systems out there getting use, especially considering that 33% of respondents checked the "Other" box.


I was surprised and impressed that the largest response(46%) was people who played in original TSR versions of the game.  Also, Pathfinder and WotC made very respectable showings.

The second most common answer was "Other" with 33% of people checking it.  There are A TON of DnD-based games out there, but I wonder if any are overwhelmingly dominant.  I should probably have added Basic Fantasy, Castles & Crusades, and Stars Without Number to the poll to see if that reduced the number of "Other" responses significantly.

Also, note that the average number of boxes respondents checked was 2.5.  So that would seem to indicate that your typical OSR guy or gal uses more than one system on a regular basis.


So how do those results compare with the Google+ Community Size numbers?

Actually, fairly similar, considering.  Most significantly, the survey showed that Labyrinth Lord is much more popular than it's Google+ following would seem to indicate. 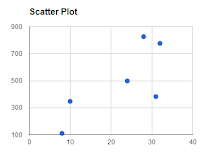 I wanted to look at the Correlation between the two metrics.  There does seem to be a loose relationship.  Too few data points to say if it's linear or what.  Assuming that it is linear, then Pearson comes out to about 0.76, which by the rule of thumb is probably not significant, so I can't say anything definitive with such a small data set except that there seems to be a relationship, which makes sense intuitively.

Just a few notes on the methodology of the survey, so that others can criticize/improve-upon it.

The list of Google+ Communities I posted the survey on is:

Also, the survey got 147 answers.  The site I used, surveymonkey.com, would only allow me to see the first 100.  To see the other 47 they want a membership fee that comes out to about 50 cents per answer. It's not a huge difference, in terms of sample size, but I'd like to have the rest of the data, so I wrote the to ask if they would make an exception.  We'll see.  I guess it's worth reading the fine print on these "free" survey sites.