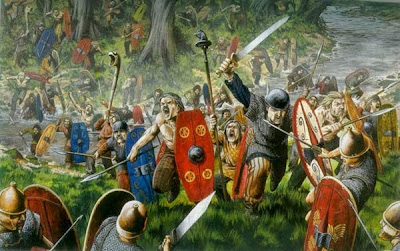 An excellent post about putting wars in your campaign left me asking what wars I've inserted in my sandbox campaigns in the past. Much to my surprise, they have all have had wars.  Why is that?  I guess it's because, indeed, having big political events going on in the background, or foreground, provides a lot of adventure hooks and makes the setting a lot more interesting.  Plus, as part of the world-building, I love coming up with the conflicts the various factions might be having. So here's a quick review of my wars:


Ah, my first sandbox campaign, run as play-by-post. The setting was a rather far-flung province of the empire, given a good degree of independence. I had a whole plan for an army to come out of the Desert, North of Flal, led by some Sorcerer-King with a dimentional-portal. They would conquer the fortified city of Flal, and then work their way West towards the PCs. By the time the Empire got their troops mustered and moved, they would have a heck of a time against the well-fortified magical minions. Unless the PCs could come up with some way to interfere with the Sorcerer's plans.  Unfortunately, PBP is so slow, none of this ever happened in-game.


OK, sort of a no-brainer, since it's set in WWII.  Anyway, the PCs did resistance-type activities, basically espionage, guerilla tactics, and salvaging war materials for the cause, all on their own initiative.

Well, New Tilia, and Neualtdorf are technically at war, though they are mostly small skirmishes and assassinations. The Baron offered the party some jobs along those lines as privateers, but they were more interested in dungeon-delving than political intrigues.
Posted by Billy at 11:56