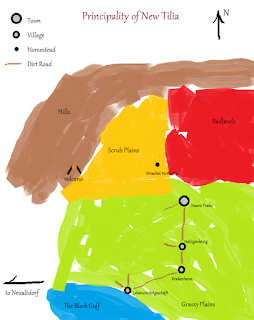 The party, consisting of an Elf noble, an Elf woodsman, a Female Dwarf warrior, a Female Dwarf healer, a Dwarf Pit-Fighter, a Wizard's Apprentice, and a Female Mercenary, took a boat to New Tilia.  They decided to disembark in the more established principality of New Tilia rather than Neualtdorf.


They arrived by boat at the seaside village of Lebensmittelgeschäft, where they were interviewed by a Sergeant before disembarking from the boat, and managed to blather out answers to his questions without giving him any real information.  They then spent a couple hours digging-up rumours.  The two rumours they managed to dig up were:


The party proceeded to the village market, checking out the wares and also hearing that The Boss pays bounties for Greenskins and monsters slain.  They were told that the best place to find nasty creatures to win bounties on would be near either the Northern or Western borders of New Tilia.

They also dug up rumours of a local scandal involving a local farmer and a prospector's wife.  The prospector's claim is in the hills on the Norther Frontier.

With several leads to the north, they decided to head for Nuovo Trantio and from there to the hilly Northern Frontier to collect bounties and investigate the first rumour.

The party headed North-East to the village of Krakenheim, where they chose to stay the night.  They were awoken by the town watchman yelling that bears had breached the perimeter and were attempting to enter a house.  Most of the party went out to hunt the bears, which they did successfully, with only one injured character(much to the DM's disappointment--I thought this would be a difficult battle!).  They then met the village's furrier who paid them well for their efforts and stayed an extra day for the healer to tend to the injured Elf's wounds.

The party continued North, arriving in the village of Heiligenkreig.  The village is dominated by two competing monasteries.  The party first encountered a monk of the Order of the Lowly Cabbage, presided over by The Immaculate Father Sergius who preaches asceticism and self-flagellation. After chasing him away, they then observed the relatively lavish quarters of the Order of the Silver Ladle, who follow the teachings of Grand Master Pinnochio Unicornio and who seek redemption through excessive consumption.  After some antics and many many OOC jokes, the party reluctantly continued North(A: "But I still have more jokes to make!"), resolving to return to loot the Order of the Silver Ladle's facilities at a later date.

The party arrived uneventfully at the outskirts of the Town of Neuvo Tratio, immediately going to inspect the Silver mine on the outskirts of the town.  They convinced a miner that they were working for The Boss and that he should give them a tour of the facility.  The Dwarves in the party were quite surprised to see such rich silver deposits in such high geologic layers, under a flat grassy plain.  They determined that this site must have been effected by some unnatural upheaval long ago, in the time of who knows what ancient race.  In addition to this information, they managed to scam some silver ore samples.

Continuing into town the party noticed:
The female characters in the party decided to flirt with and distract the gunsmith and his Dwarven assistant so that someone could steal a firearm.  The assistant was smitten, but the Gunsmith shooed the girls away.  One of the Dwarven women wouldn't go until she had bought an incendiary, which proved a providential purchase later-on.

The party continued North, passing an occasional homestead.  They left the rich grasslands and entered the dry scrub lands, looking for a homestead said to be nearby.  Suddenly, towards evening, they noticed a large tree that seemed to be moving furtively in their direction.  Deciding to shoot first, ask questions later, one of the Elves sent a flaming arrow it's way.  The tree swung it's branch, easily extinguishing the arrow and charged the party.  This could easily have turned out badly.  The Treeman is a very powerful opponent, and even if it wasn't mad at the party to begin with, their quick use of fire and a wood-chopper's axe quickly angered the house-size monster.  If it weren't for the just purchased incendiary, there would almost certainly have been PC deaths.

With the monster burned and the scrub-land quickly igniting, the party made double-time towards the next homestead, being guided by it's light in the night.  They found the family already working to clear any and all dry brush from around their dwelling.  The party helped them, then answered the family's queries about the cause of the fire by mentioning that they "Saw this tree-creature die by fire and start the blaze."  To this the family replied "The guardian is dead!?  Who will protect us now from the creatures to the North!"  Oops!  That's where the session ended.
Posted by Billy at 02:34