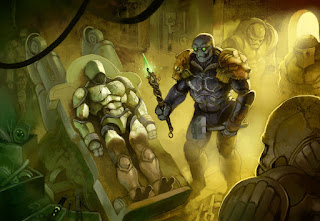 I was reading through Stars Without Numbers, a recent DnD based Sci-Fi game.  I like it.  But part of me longs for that good old CyberPunk 2020 combat.  Despite the Sci-Fi weaponry, SWON's combat still feels more like Star-Trek's phaser fights(which look more like clicking a remote control, by the way), than a fast-paced gun-battle.

Some computer games have this vibe.  XCOM has it.  Hotline Miami has it.  And as Firaxis's designers have suggested "there’s a bit of a renaissance with challenge and permanent death games".

So I was thinking about what sort of house-rules could give a DnD-based Sci-Fi game the same quick, deadly feel.

The first thing I would do is make Hitpoints more or less static.  CP2020 gives you 12 HP until you start entering Mortal Wounds territory.  So I think I would give starting characters 12HP, modified by CON bonus.  Maybe you could add 1HP per level--have to think about that one.

When a character drops to 0 or less HP, they start rolling on a Death and Dismemberment table for bleeding, limb loss, shock, and death.  And, of course, you have to think about rules for cyber-limbs, etc.

Since HP are fixed, we need to design damage-reducing armour.  You could basically just take stats similar to CP2020.  Stuff like:

There also have to be lots of awesome guns.  Again, you can borrow range, damage, ROF from CP2020.  This includes:

Automatic weapons need to do more damage, not just give a better chance to hit as in SWON.  I'd give 4 options: Single Shot, Burst, Full Auto, Full Auto Spray 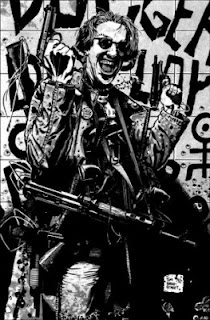 Fires 3 rounds with a quick tap of the trigger.

Hold down the trigger at one target.

Hold down the trigger at a group of targets, standing more or less next to one another 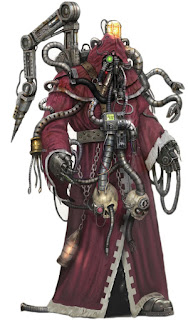 Besides that, you need to think about what Skill System to use, what Class System to use, etc.  I like Stars Without Numbers' skill system.  As far as classes, CP2020 has much cooler ones(Rockerboy, Solo, Netrunner, Media, Cop, Corporate, Fixer, Nomad) but maybe that could be handled in the character description, rather than as a game mechanic.

Also, monster/alien stats need to be made taking the new HP/Armor system into account.

And of course Cyberware needs to be stat-ed up.

Anyway, I suppose this has mostly been an intellectual exercise.  These are pretty fundamental changes to DnD and one could argue that compatibility has been broken to the point where you might as well just use CP2020.  But we have identified the factors which make CP2020 combat feel so different from DnD.  In any case, one might theoretically use this system to run Time Raiders, XCOM as an RPG, or any other campaign set in a Cyberpunk world.