Catching-up with the Dragon Queen

Well, I can't say I've been terribly on-task with our Hoard of the Dragon Queen campaign. I've been lazy about posting updates and also I've missed many of the game sessions. Real life has been getting in the way again and when I don't have as much time to game I also find I'm less excited about posting summaries when I do manage to join our group. That said, I've had a week's vacation to recharge my batteries, so here goes:

First off, I switched-out Sir Manly for a bitchin DCC Wizard: Kunab the Wizbarian, randomly generated at 6th level from purplesorcerer.com. He's pretty mediocre at the whole Magic-thing, and a bit low on the hitpoints, but he got personality up the wazoo! 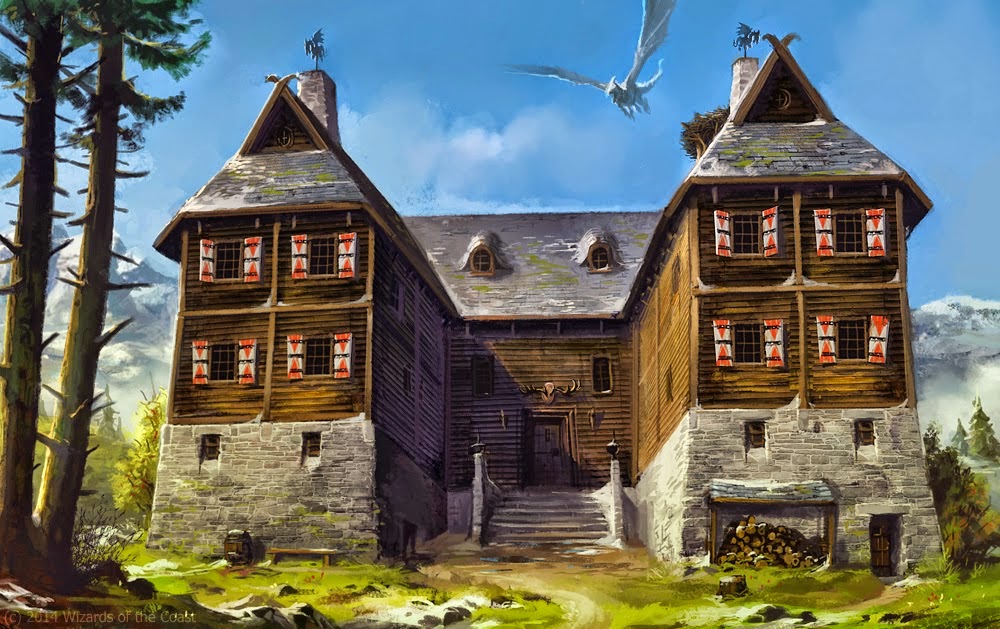 On the trail of the dragon cultists and their treasure, the party found themselves at the nexus of a number of teleporters, and near a rather large and imposing hunting lodge.

Kunab summoned some small birds to spy the place out and the party determined(incorrectly, as it turned out) that the place was being run by cultists and rather ripe for the plunder. We weaseled our way inside and split the party to more speedily loot the place. Half the party(including my characters Kunab and Rama), went off to check out one of the rooms dominated by a large magic painting, while the other half went off to poison the lodge's food supply with sleeping elixir.

Kunab, Rama and the party's Paladin quickly found themselves on the wrong side of the tapestry which, much to their dismay, included exactly zero magically enchanted stags and one all day hike to rejoin the party.

The rest of the gang ended-up in a full-out brawl with the kitchen staff and then other denizens of the lodge, which they managed to survive.

Finally, towards the end of the day, the party was reunited and we got to meet the mistress of this lodge, Talis, a high-ranking, magically-inclined cultist. She immediately saw through our attempts to explain away the reduction in her staff but nevertheless hired us to sabotage the plans of her rival cultist.


Is the following session, Talis sent us after her rival's floating castle, which is being used to transport the hoard.

(On a side note, floating castles are one of the most popular trope's in fantasy literature. Their first appearance seems to be Laputa, from Gulliver's Travels, though even that seems to be inspired by the floating island of Aiolia from the Odyssey.)

In any case, the party made their way to this remote village near the floating castle, disguised as cultists with the pass-code to the castle. We quickly ended up in a fight to the death with the inhabitants of the local tavern.

Now here we had a misunderstanding. All the players had assumed the village was full of "civilians" not associated with the cultists. So, when they started actively trying to prevent us from leaving the bar, things quickly escalated.

Towards the end of the combat, the DM told us that, in fact, the village was entirely populated with cultists and that he had told us that already and it was our problem that none of the players had heard that detail. That may be true--we had a lot of info dumped on us at the start of the session, while leveling-up our PCs and I'm sure I missed at least half of it.

Now there is certainly something very Old School about that sort of "Gotcha" DM attitude. That said, I generally prefer a different approach. It's true that the DM should act as an oracle for the setting whenever players ask, but that isn't enough. I think it's also the DM's job to proactively correct player misunderstandings regarding setting details.

Many of our players have jobs and families and we only get together once or twice a month for a couple hours. None of us has the time to read about the setting on our own. Not only that, but our game sessions tend to be rather rushed, trying to fit as much as possible into 2 hours or so. So often times, the setup for a session occurs while ordering pizza, leveling-up characters, or communicating with players who are running late or trying to connect via video-chat. That being the case, the DM should keep an eye out for misunderstandings or missed information.

Of course, there's another side to that coin, that we, the players, also need to make sure and ask if something is unclear and to try and help the DM understand what we have missed.

In any case, the party eventually neutralized the denizens of the tavern, stole their magic mug of endless ale, and blended-in to the large cultist caravan, before we could be caught by the cultist Warden and his pet wyverns. Once we passed through the gates of the floating castle, we ended the session there...