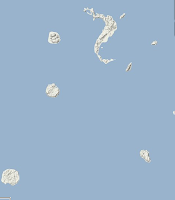 So here is a Saltbox Generator, usable with this starting scenario for a Pirate Campaign.  Basically, this generator is a toolkit for helping a GM quickly and randomly produce a Pirate Sandbox, in the spirit of WFRP's Border Princes.

This toolkit will produce a cluster of island along a trade-route, populated with people, monsters, and ancient ruins.  I'll post a sample Saltbox generated with this tookit in the near future.

Start with a blank 39x39 grid/hexmap.  You can make the scale of this grid whatever you want.  I prefer a grid rather than hexes since it makes navigating with the 8 basic compass directions a little easier.  Hexmaps look nicer, but anyway I don't show the players the game map(though I'll help them map as they explore).

I like 36 mile grid-squares for this.  This puts the islands close enough together to allow travel-by-sail between them, without making the overall map too small.  When I actually run the game, I'll use a 12 mile grid.  This should make the map feel pretty big to the players.

In general I'll say that 120ft movement on a dirt road allows for 24miles travel in an 8 hour day.  Sea Travel will be much faster, since the ship can potentially move faster and sail round the clock.

Generate Islands and draw them on the grid.  Number them so you can make a key describing their details.

Place 1d6 ruins on the islands.  Use the modules of your choice or roll on the tables below for some ideas.  Mark ruins on the map with a simple X and put the details in the key.

4b. Give each a Name/Title

Place settlements wherever you see fit.  Generally the more habitable islands should get priority.  Mark them with circles, or dots of varying size and put the details in the key.

5b. Who lives there(per settlement):

5c-1. Dark Secret(for large settlements, may only be a small cell)

If multiple settlements co-exist on an island and are in contact, feel free and add dirt roads between them

Place 2d4 monster lairs on the map.  Mark them with the letter L and put the details in the key.

Draw the trade route between Old and New Worlds as a path through the sea across the map.  This is where the party is most likely to encounter large ships, etc.

Add a compass direction to your map(Up=North).  You may also want to add a key with the symbols for settlements, lairs, ruins, etc.

Now make random tables for various locations on the map.  Here are some general ones you may want to use: