So two of our players were running really late for last night's G+ WFRP session, so I took the opportunity to run the starting scenario as a DCC funnel.

So A. rolled up four 0-level characters: a halfling sailor, a trapper, an alchemist, and a squire.  They were taking a riverboat to the Eastern frontier under the employ of a wealthy horse merchant who was hiring them on a temporary basis as extra security for 1GP per week.

The boat was, of course, ambushed by a host of chain mailed baddies.  The party managed to get the boat turned around before they could board, but the Alchemist was badly wounded.  As the boat returned to port, the 3 remaining healthy characters decided to seek out their employer's homestead by foot.

They sabotaged the ambusher's chain-trap, ransacked the supplies at the abandoned ferry station, avoided an angry bear, and found their way down-river to the location of the homestead.  They found it already under attack, with the barn on fire. 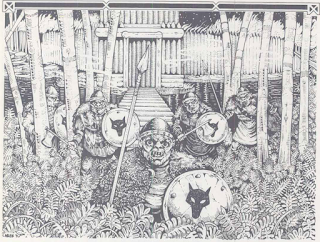 Racing into the clearing, the party was engaged by 4 goblins who won
initiative and killed the halfling and squire instantly with well-thrown spears.  The remaining trapper, grabbed a spear and ran the largest of the goblins through, before being hacked to death with axes.

So...the alchemist survived the funnel and can go on to be 1st-level!

In retrospect, I think it's a problem running a funnel as a 1-shot, since the player has less incentive to be cautious with these throw-away characters.  But it was still fun and there was some great player problem-solving along the way.

I should also note, that Night's Dark Terror is intended for levels 2-4, not level 0, but that's sort of what I was going for: putting these weaklings in a really nasty situation, outnumbered and out-gunned in the wilderness and seeing how far they could get.  They got pretty far, though I was hoping they would at least survive to see the siege of the homestead...
Posted by Billy at 14:45