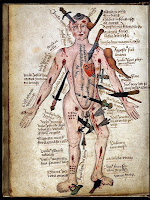 After a bit of playtesting, I realized that there are two problems with my Death & Dismemberment Table:

Model to Validate the Problem


I suspected that there was a statistical reason for this, but I wasn't sure.  Here's a proof that is approximate, but shows clearly that there is a problem.  Note that I'm choosing assumptions that make this into a simple discreet problem:
First let's calculate the chance of each roll value, given a specific number of HP:
So given these assumptions, what is the total chance of each entry occurring for a given roll(add up the percentages above and divide by 10)?


OK, so this model validates my intuitive claims that there are a lot of Horrific Demises and very few low rolls.  It also shows that limb loss, which I wanted for my pirate game, is pretty rare.  So now that we know we have a problem, how can we re-balance the table to get a more even spread?  I would suggest that we spread out the rolls more such that all entries in the table have two numbers.  Now let's recalculate the chances for each entry in the table as we did above:

That's more the sort of distribution I was looking for.  So, for reference, here is the updated table:

Upon taking damage which leaves a character with 0 or fewer HP, roll a d10 + the number of negative hitpoints the character has.

1-2 Now You've Made Him Mad: +1 to victim's strength bonus for remainder of fight
3-4 That'll Leave a Scar: gains or loses 1d3 CHR
5-6 A Stunning Blow: character is not killed, but falls unconscious for 1d10 rounds
7-8 Hit an Artery: Unconscious. Lose 1 HP per rounds until bandaged. If reaches -10 is dead
9-10 Maiming Locational Hit(see sub-table)
11-12 Death Defying Stand: lose 1HP per round, cannot be bandaged. When reaches -10 is dead.
13-14 Killed Instantly
15+ Horrific Demise: It's going to take a Resurrection spell to bring them back.

For these, weapon type matters(heavy gun, slashing, piercing, small firearm, bludgeoning). Roll area of the body and then see the details below.