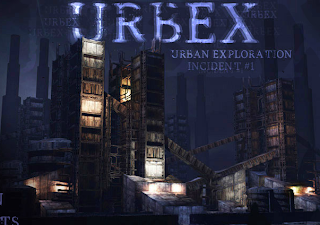 I recently played through a short Flash Horror game called URBEX.  You're an Urban Explorer who has come to these industrial ruins to photograph your friend's graffiti art.  Since it's a horror game, you find more than just the dilapidated old buildings you expected.

What URBEX really brought home for me, though is that creating Horror is not so much about WHAT you do, it's about HOW you do it.  It's a very minimalist game, yet it still manages to create that atmosphere of suspense.  To quote Lovecraft:


Atmosphere is the all-important thing, for the final criterion of authenticity is not the dovetailing of a plot but the creation of a given sensation.


In an old post, I raised the question whether you can create the "Naive Victim" Horror Trope in a role-playing game, since the players tend to respond to anything suspicious with considerable caution.  In that post I suggested that one way to incorporate the Naive Victim is via NPCs, with the party running into previous victims or their remains.

URBEX takes a different approach.  By giving the PC a relatively mundane mission, to find and photograph Stinger's graffiti, the game turns you into a Naive Victim.  Even though you know it's a horror game, and you see strange shapes flitting through the shadows, the player can lie to himself and say "It will be OK." while you're pulling out your camera and clicking to photograph the graffiti.

So if I were to run a Horror scenario in one of my games, I would give the PCs a mundane mission to do, and try and keep the focus on that mission, while all the time dropping clues that all is not right.  Then, when the tension hits it's peak, and the party decides to run for it, they hear something pursuing them and find that the way they came in has been blocked!  Forget insanity points--I'll measure success my how many players wet themselves.
Posted by Billy at 23:15