Another short session via G+, with some technical difficulties in the middle.

The party opens the trap door, to find it opens on a wide empty space.  Through step-by-step experimentation, they discover:


When they couldn't convince the Robot Crane to carry them via the handholds, they smashed it, reducing it to expensive scrap-metal. 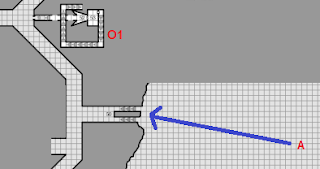 They tied 70ft of rope around Grim's waist and he set about trying to pull himself along the handholds.  9 times he fell and they hoisted him back up.  The 10th time he kept going till the rope ran out.  He kept on going and made it to the end of the handholds.  There was a tube-like passage there in the wall of the large subterranean cavern.  He entered.  It was a pipe about 25 feet wide, with a foot or so of water, flowing from the lake in two channels, at the bottom.  The passage led to a T-shaped intersection.  He went right(North), where another water source was flowing from.

He had a run-in with a security robot with a phaser, but send it fleeing home to Mother.

Then he came to a Y-shaped junction, with a small service door to the East between the branches of the Y.  He entered the door and came to a room with a strange cabinet with lights and buttons.  After failing to work the thing, he smashed it and an alarm went off.  He left the room and found the water level a bit lower in the passages.

He then returned to the underground lake where a low stone barrier had been raised to prevent the lake-water from flowing in.  He shouted his findings to his companions above.  They are still not sure how to reach him.

We ended the session there.
Posted by Billy at 15:10