Well, the kids are older and it's time Doggie Game got an upgrade. That's right folks, we now have character sheets and the kids made them themselves. You Grognards are going to like these character sheets cause they are small, two-sides-of-a-post-it-note small, in fact. That's just how I roll, folks. I like a character sheet that can be filled out and used with only 15 minutes till bed-time!

Well, the two little mongrels got started wandering in the middle of the forest when they ran up against the biggest, meanest lion they ever did see! Boobie tried scaring the lion, but hes not very smart and he didn't manage it. Pooka, on the other hand, chose deception and pretend to be a baby lion. She rolled well, despite having a Brains of 1, and pulled-off the scheme. The lion took her away from the aggressive doggie and put her in it's cave. When it went off to bring her food, she snuck away.

Re-united, the doggies were still lost in the forest. They decided to look for a big friendly bird to take them home. After this well-laid plan was executed successfully, they found their home locked and them without a key. After some searching they found a key and opened the door to find...their mother who scolded them and put them to bed!


You may not have noticed, but all the skill rolls were made with the Brains attribute, to the exclusion of Strength and Speed. Yeah, we got a couple of young thinkers here...


I like on-the-fly rulings, as well as the moderate amount of haggling that tends to accompany it. But the cruel and unrelenting DM didn't give in to the following haggling session:

Player: A lion? Yay! We get to roll our dice now!


DM: First tell me what your doggie does and then you'll get to roll your dice.


Player: Please can we roll our dice first?


DM: No, you need to tell me what your doggie does first.


Player: But I want to roll my dice!


DM: JUST TELL ME WHAT YOUR BLOODY DOG DOES!

A Game Within a Game

Wow, who would have thought that starting a second blog and then starting a new job with an almost 2-hours-each-way commute would have been so detrimental for my "Billy Goes to Mordor" output. I never would have guessed...

But, I'm still hanging in there.

So, speaking of never knowing what to expect, I've been reading Tad Williams "Otherland Volume 1: City of Golden Shadow". I picked up this one, together with Robert Heinlein's "Stranger in a Strange Land", while swapping books with a friend. I expected the latter to be great, with it's epic title and cool cover-art, while I didn't have high hopes for "Otherland" with it's over-long title and being by an author I had never read nor had recommended to me. So, of course, I'm loving "Otherland" after I finally gave up on "Stranger" 100 pages in.

A Story Within A Story 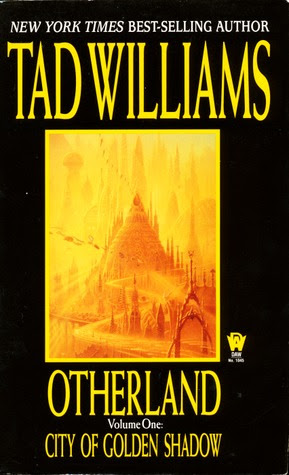 Otherland starts out jumping back and forth between a number of apparently unrelated Cyberpunk and Fantasy stories, each of them quite compelling. But, halfway through, it's clear from a number of hints that some(and presumably all) of the stories are somehow related, though it's still largely a mystery how.

One of the narratives I found particularly compelling is that of Thargor the Barbarian. Thargor is fairly standard Swords & Sorcery Barbarian, off adventuring with his buddy Pithlit the Thief. Not quite Fafhrd and the Grey Mouser, but still pretty good stuff. They end up encountering something truly weird and we soon find out that the two are actually young kids playing an MMORPG in virtual reality. The Fantasy adventure quickly becomes a Cyberpunk tale as the kids are sucked into a high-stakes game of intrigue.

The story really plays in with the book's general theme of the strange mixing of realities created by the proliferation of VR and the Net. The youths' RL(Real-Life) personas reflect, but at the same time contrast with, their bad-ass PCs. This is particularly pronounced in "The Deadly Tower of Senbar Flay" where Thargor's bravado and Orlando's cocky confidence as his online avatar, clash so starkly in the following scene where he lies awake in bed, worried his parents will ground him and aware just how vulnerable a child like him would be if the mysterious criminals should come after him in RL.


I think there's a great basis for an RPG adventure here. Tell your group to make High-Level DnD PCs and start an adventure. Then, once they're sufficiently deep-in (maybe towards the end of the first session) have them hit the anomaly and reveal to them that they are actually kids playing an MMORPG. Then they need to create CP2020 PCs(perhaps using Cybergeneration rules) and they can investigate the anomaly in the MMORPG, online using their computer skills, and in RL. The stakes get increasingly higher since dying in the MMORPG just loses you your current PC, while online activity can get you in trouble with the law and other groups, and in RL you can die, get sent to Juvy, etc.
Posted by Billy at 23:03 No comments: