By the Numbers: the Relative Popularity of DnD Retro Clones

One of the recurring topics in my work as a Software Developer is how to measure usage of your product.  The main problem is that the information that you are dealing with is incomplete.  This results in the secondary problem oh how to interpret the imperfect measures we do have.  A simple example of this is counting downloads, which don't necessarily correlate to the number of users, nor does it give you an indication of how much they use.

So I'd like to ask the same question about DnD Retro Clones.

Which retro-closes are being actively used by the most people to play games?


So how could we attempt to estimate this?

This is a pretty easy metric to count.  The problem is that downloads, and even sales, don't necessarily mean that the product was used--often times users download a rule-set or adventure just to skim it for ideas.  Also, even if a user downloads a product and uses it, you don't know if they used it for a single session or for years.

There is also the problem of comparing download numbers for a free game vs. one that costs money. The user is will be less careful not to lose the free game and thus more likely to download it multiple times(I've probably downloaded Labyrinth Lord half a dozen times on different computers).

You might be able to overcome this to some degree with a survey.  Send users a survey periodically, asking them what products they are currently using.  The results could be used to translate the download numbers into a number of active users.  Of course, there may be some bias.  For instance, gamers who used a product might be more likely to respond to the survey than those who didn't.

You could come up with a number of different types of survey to determine the relative popularity of different games.  You could send emails.  You could survey people at gaming conventions.  The problem is distributing it evenly among the gaming population.  Are players of certain systems more likely to answer email surveys?  Are they more likely to attend conventions?  So there may still be a bias, which could easily be seen by comparing the results of different surveys.


Well, all these methods require a good deal of effort.  An easier option is to compare membership in Google + communities.  There are two problems with this:


On the other hand, membership may still correlate to actual usage.  And since OSR is a very Online movement, I'm going to assume(perhaps incorrectly) that the system-Google+ bias is small.

So here are the numbers: 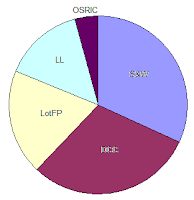 Well, I knew Swords & Wizardry was popular, but I didn't realize just how popular.  I guess it's the most faithful system to ODnD, so I assume that's why it tops the list.

DCC RPG is next on the list.  I know it's quite popular, though the rulebook is more of a Hair-Metal-Love-Ballad to DnD than a rules codex.  I love the careers, ascending AC, and the simplified saving throws, as well as the art and general vibe of the book.  They also just keep putting out great adventures.  That said, the magic system and various other mechanics are overly complex for my tastes.

LotFP is up there.  I assume that's due to their heavy internet marketing and the amazing adventures they keep putting out(and perhaps their desperate attempts to show how contravertial and edgy they are).  As far as the rule-set itself, I have to confess my relative ignorance.  Is there anything particularly novel there?  Don't get me wrong, they seem to put most of their emphasis on the adventure content, rather than the rules, which suits my tastes just fine.

Labyrinth Lord is still my personal favourite, being free, simple, and a little more streamlined than S&W, in my opinion.  I was a bit sad to see it so low on the list, though still with a decent following.

Basic Fantasy, Adventurer Conquerer King, and Castles and Crusades have sort of been off my radar.  I remember hearing of them, but I've never downloaded them and don't really know much about them.

I have a soft-spot in my heart for OSRIC, so I was sad to see it at the end of this list.  AD&D was the version of the game I first used.  Plus I ran a very successful Play By Post game with the system a few years back.  That said, my tasted have shifted to simpler versions of the game, and I see I'm not alone.