So recently I created my first Call of Cthulhu character, disgraced baseballer Buck Pickman. Now, in the interest of learning the game system, let's put him through an encounter:

It's late at night and Buck is at the old Crenshaw residence on the outskirts of Salem. More specifically, he is in the process of breaking into the Crenshaw's abandoned farmhouse. He's investigating the reports he has heard of strange lights and drumming coming from the place.


After climbing in a ground-floor window, and setting his lantern on the counter, he has begun rummaging around. Suddenly he hears steps on the front porch. He uses his Listen skill to see what he can find. He rolls a 44, success! He hears three barefooted people at the front door. He gets a check next to the skill for a chance to improve it at the end of the session. 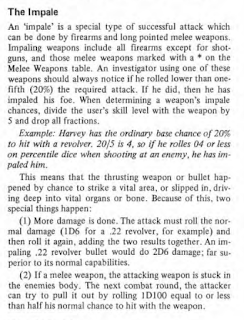 He draws his revolver and steps into the shadows. A key turns and the door opens. A cultist with tribal headdress and a long bush knife steps into the room, followed by similarly outfitted characters. Buck attempts a Hide skill check but rolls 20. One of the cultists rounds a corner and the two make eye contact.


Buck has a missile weapon so he goes first. He aims from point blank range(70% becomes 140%) and shoots. He rolls a 25, not only a hit but an impale. He rolls 2d10 for damage and gets a 17. The cultist only had 15 HP so he falls down dead. He gets a check next to the Handgun skill for a chance to improve it at the end of the session.

Seeing their ally fall, the other two cultists rush towards the sound of the shot, spotting Buck in the corner.


Buck sees he is outnumbered and decides to flee towards the window, using his remarkable Jump skill to make a quick egress. The cultists have higher DEX scores so they go first.

The second cultist is faster. He takes a swipe at Buck with his weapon. He rolls a 2, scoring an impale. 11 damage. Since Buck has only 2HP left, he falls unconscious. Fade to black.

He wakes up bound and in pain, his wound throbbing to the sound of drumming. Masked bodies undulate around him. Strange lights appear in the sky. He is about to find out what the rumors were all about. In fact, he is about to play a central role in a most inhuman ritual... 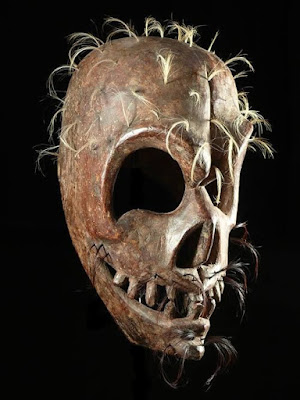 The game system is pretty easy to learn. It reminds me of Cyberpunk 2020, which is a system I've used quite a bit. It's percentage-based. Direct combat is quick and deadly and therefore probably best avoided. I like it.