Lycanthropy for Fun and Profit!

Due to the Passover holiday, we had 13 gamers turn up for game night, including 8 kids(my daughter included). We decided to "split the party" and run an adults game and a kids game. Avi ran the adults game. I got the kids. It was not dull. Rarely has so much ADHD sat around a single table. We continued our long-running Swords and Wizardry Palace of the Silver Princess campaign. Here is the summary: 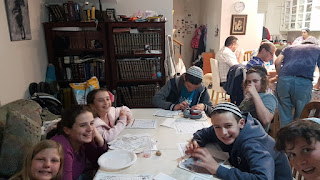 
The party started off in N'Sau, a village full of war-refugees. First everyone got excited about fishing and made skill rolls. Minionoid then decided it was time to avenge his father, so the party started their journey to the Palace. Blitzen decided to stay and fish and was eventually eaten by Bears(I think her player realized she was ~5 years older than any of the other players, so she quickly lost interest)

They encountered a lone Wolf Warrior on horseback. They tried to kill him but he fled. Firestorm befriended his horse, so he was forced to flee on foot and she kept his horse.

At night, they encountered a Bugbear and two Orcs. Yoland charmed the Bugbear, and the Orcs were killed, with much excitement over the division of treasure. Minion was knocked unconscious and bandaged by Firestorm and the party took a few days for him to heal.

(A quick DM note: I quickly realized that with 6 hyperactive kids shouting , having everyone roll for initiative to determine combat order, as I usually do, was simply not going to work. I chose to just go clockwise around the table, with the Monsters going last, which worked much better, especially with kids getting up and changing seats.)

Upon reaching the Palace the next day, the party saw two Wolf Warriors riding in the front gate. They climbed in through the tower window.

They did some exploring, encountered killer bubbles, and purple moss. They found a statue of mother and daughter with a hidden compartment revealing a riddle about My Lady's Heart. At this point, they have explored most of the ground-level of the dungeon, except for the Northwestern and Southeastern quadrants.

Ragnar discovered a treasure, including gold and a silver Wolf Warrior ring, but was discovered by the rest of the party. Princessa and Minionoid beat him up, divvied up the stuff, with Firestorm healing him and taking the ring.

They party then encountered a red-headed amazon. They chased her and when she turned to face them Princessa and Firestorm began to parlay with her. Her name is Aliegha and she is here because of her master. She was happy to hear that the party had killed some Wolf Warriors, since they have been hunting her.

At this point, Minionoid and Ragnar got bored and wanted to just kill Aliegha. This really upset the two girls, who were trying to befriend her. (Was a really funny pre-teen boys/girls dynamic for me to observe.) Finally, Minionoid declared he was shooting an arrow at her, while Ragnar snuck up behind her for the backstab.

Aliegha was injured, but suddenly shape-changed into a bear, knocked Minionoid unconscious and chased away Ragnar. Then she told the girls her story. 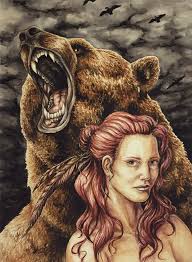 She is a Werebear, cursed with lycanthropy and hunted by the Wolf Warriors, notorious lycanthrope hunters. She is here because she works for her master, a powerful Cleric, Catharandamus. He made a deal with the Goblin king: he will help the Goblins take-over Gulluvia, and the Goblins will then help him find My Lady's Heart.

Princessa and Firestorm tried to convince Aliegha to revoke her support for this evil plan, but she sadly told them there was nothing she could do. She urged the party to flee this place and go on with their lives elsewhere.

Princessa convinced Aliegha to bite her, thus giving her lycanthropy too! With that, Aliegha bade them farewell and left.

We ended there, and everyone got 500XP, which just pushed Princessa to 2nd Level!

On Running Games for Kids

This was my first time running a game for kids who were mostly not my own. It was fun but hard! The kids' energy was high, but they also occasionally got distracted and wandered off. My daughter, for example, went and made herself an omelette at one point, but was also very engaged at other points and overall told me she had a great time and couldn't wait to play again. Another kid was very engaged for most of the game, but disappeared about 1/2 an hour before the end.

Character creation was a bit hectic with all the new players. Some ported over an existing character from another game to 1st Level Swords and Wizardry, others created characters from scratch. All but one of the kids had played some form of DnD before, either joining for one of our adult games or going to a paid, after-school DnD activity, run by a guy in the neighborhood.

Two brothers who were there were constantly fighting with each other. I didn't manage to separate them, but if I run another game in this series I definitely would. Their dad told me they had an amazing time though, so apparently the fighting didn't hurt their experience, even if it distracted me.

One thing for sure is that, if I run a game like this again, I will implement a "No Screens" rule during play(to be fair, I've had this with adult players, which is infinitely more annoying). One of the players was on his phone the entire time and we had to keep calling him over to the table and explaining him what was happening now. At some point I just stopped calling him over.

Finally, I think that I would cap the number of players at the end. Seven is just too much, and anyway, three of them dropped-off leaving us with four highly engaged characters at the end.
Posted by Billy at 04:34 No comments:

S. Craig Zahler's Bone Tomahawk is a film that plays out like a DnD One-Shot. A kidnapped woman, a group volunteers to go after her, a journey into the wilderness to the Troglodytes' base, and the resolution by combat with no quarter asked and none given. Here are a few things from the movie I'd like to bring into my next game session. 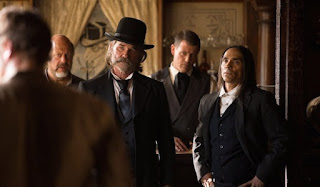 There's a lot to love about the scene of the Native American guide who helps the party locate the Troglodytes' base. There's a weird power-dynamic between the Indian Expert and the White Settlers. Behind that tension, all his passive-aggressive answers build-up the mystery and danger of the mission: 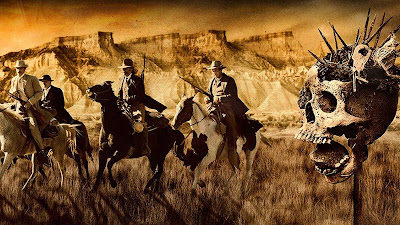 One of my favorite recurring western themes is the journey through the wilderness. The party must travel over long barren wilderness to reach their destination. As DM I usually drag this out a bit, with random encounter rolls, and lots of questions about the party's camp preparations. I especially enjoy playing out the tension, will they get attacked at night. What I'd like to add is the effect of the journey/weather. Some constitution checks for men and their mounts to leave the party not at their best when they arrive. 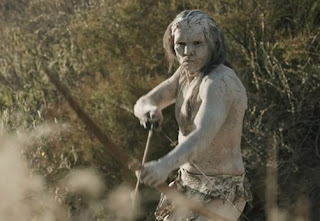 The Terror of the Bow

The ambush by the Troglodytes is great. The party is sneaking around, trying to scout out the enemy base, when out of nowhere, arrows. The attack is so silent and understated, it takes the audience a couple seconds to process what just happened.

DM's who provide real dangerous challenges for the PCs must occasionally deal with Total Party Kills, when the entire adventuring party gets wiped out in one combat. One option is to roll up a new party of characters who are friends or relatives of the old one. Bone Tomahawk uses the classic trope of "Knocked Unconscious then Wake Up in a Cage". This works if you are using a system which distinguishes between death and unconscious characters.

My First Call of Cthulhu Character

For a few years now I've had a dream of running a Call of Cthulhu campaign. In particular, I want to run that legendary campaign Masks of Nyarlathotep. It's a sprawling, globe-trotting mystery, full of weird horror, and it's been heavily hacked and expanded by fans over the years, such that the setting has taken on a life of it's own. The only thing stopping me is that I have to learn the CoC system...

As a first step towards learning the system, I created a character. He's a disgraced baseball player who has moved back to his hometown of Salem. He has too much money, energy, and time on his hands, and people like that have a way of stumbling into cultists and cosmic horrors. He has a mean fastball, is good with a bat, and has taken up shooting cans and bottles with a .38 revolver on his estate, now that he so much time on his hands.


The rule set I managed to get my hands on was 1999's Edition 5.6. I'm not sure how this edition compares with earlier ones in terms of complexity, but it took a fair amount of time to make all the rolls, allocations, and background for this character. I want to see if earlier editions are simpler since I generally prefer lighter rule-sets.