Tales of Blood and Glory: The Eyes of the Dragon 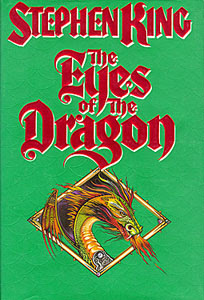 Published in 1988 by Stephen King, the basic idea behind "The Eyes of the Dragon" can be summed up by the blurb on the back "Once upon a time--there was TERROR".  In other words, the novel is a mash-up between the Fairy Tale and Horror genres.  While it captures the mood of the former proficiently, it doesn't do the latter much justice since "The Eyes of the Dragon" is not scary.

One could argue that this is intentional.  Several times, the fairy-tale style made me think that the book was intended for children.  If that is true, then it's possible that King intentionally tones-down the terror.

In any case, I'm more interested in why the book is not scary.  The climax of the book occurs towards the end when Prince Peter decides to attempt a dangerous escape from his incarceration.  At the same time, the evil wizard Flagg has decided to do away with the prince once and for all, and is racing to accomplish the grisly task.

This could have been a scary scene with the proper build-up.  As we discussed before, build-up is critical in creating an atmosphere of Horror.  But, alas, the scene doesn't have the proper build-up.  We've spent the entire novel getting to know Flagg and by the time we reach this scene, he has been thoroughly demystified.  The question is raised whether he is human at all, but it all comes-off as rather superficial, since he has already shown us all his tricks.

I did enjoy the Necronomicon reference, when Flagg's spellbook is described as "written on the high, distant Plains of Leng by a madman named Alhazred".  King is apparently quite the Lovecraft fan, as he refers to him as "the twentieth century's greatest practitioner of the classic horror tale".  That said, "The Eyes of the Dragon" doesn't live up to that legacy very well.
Posted by Nadav at 03:38