So I've been working on an Ad-Hoc Dungeon Generator that can be used to create a dungeon room-by-room and corridor-by-corridor during play.  The dungeon in question is under a particularly old part of a relatively modern city and comprises the basement-level of the city and various caves and catacombs beneath.


Whenever the party investigates a room/corridor, the DM rolls 5d10 corresponding to the first 5 columns.  The 6th column is for if the party searches for secret doors.  The 7th column is a sub-table of an entry in the 5th column.  Also I reference a few other tables not included here.

Here's a sample map I generated, one room at a time, to try-out the generator. 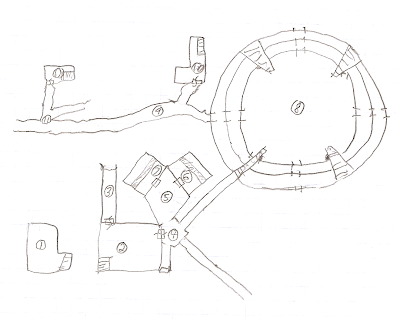 Room 1: The party begins in a dark, musty basement, where they fail to find anything unusual.


Room 2: In the second basement they investigate they discover two secret doors in the walls.


Room 3: One leads to a clearly man-made corridor, containing poisonous fungus and completely blocked by an abnormally large rat's nest at the end.


Room 4: The other leads to a small secret, hexagonal room with a stone pedestal in the middle of the floor.  Five man-man passages, large enough for a man to crawl through, extend from the 5 sides(including the passage you entered through.  Peering inside, the two in front of you extend a long way, while the right-most extends only 20ft or so.  The left-most seems to enter another room.  Absolute silence reigns.

Room 5: The party opts to go one-by-one into the room to the left.  It turns out to be diamond shaped, about 40ft by 30ft, clearly man-made.  The walls are covered with strange patterns of pink and green lichen.  Two narrow, but heavy-wooden doors appear in the opposite walls.  The wood appears quite old and brittle.

Room 6: The party listens at the right-most door of Room 5.  It is jammed so they break it down and find a small man-made room with no exits.  A small raised section of stone floor is in the opposite corner.  They search, find nothing, and listen at the other door, breaking it down two when opening it.

Room 7: Nearly identical to Room 5, this room has Yellow fungus all over the walls.  On the back wall, over the dais is a Roman mosaic depicting a rich man's possessions.  Most prominent is a depiction of a large wooden chest.  The mosaic looks like it has been relocated here in contemporary times.

The latch of the chest is a button that can be pressed to open this part of the wall.  It is trapped with a poisoned needle, such that if a player pushes it with their finger, they will be poisoned.  Inside the compartment is gold coinage, apparently from the middle ages.

Room 8: The party returns to room 4 and goes down the long left corridor.  The corridor ends in steps, descending into a stone amphitheater.  The amphitheater has 3 levels and a total of 20 exits!  You can make out strange animal footprints on the bottom.  Claw marks are clearly visible, but they seem too large for any urban animals.

Room 9: The party tries the first exit on their left on the top level.  It leads to a long natural corridor with a side passage.  There are little niches along the side, that may or may not be natural.

Room 10: The small side passage ends, covered from the outside with piles of wood.  The party pushes them over, revealing a basement.

Room 11: The passage splits into 3.  There is a body here: perhaps a few years dead.  He wears a chainmail shirt under a modern coat, now shredded.  Underneath the body is a silver-plated German P38 pistol with the image of a hand with a 7-pointed star inside, imprinted on both sides.  It is loaded with silver bullets.

Room 12: The party tries one of the branches, revealing a secret passage to a small, very cluttered basement.  Suddenly, the door above opens carefully and two Russian soldiers enter quietly, holding lanterns and rifles, stopping in surprise at the top of the steps when they see the party.


The generation is pretty fast, but I think I need a player who will map and take notes, to make it practical.  Otherwise it may be too much work for the DM during the session.

Anyway, I'm pretty happy with the balance.  I'd like more clues, traps, and strange things than actual denizens.  There are denizens, but they are few and furtive and the party will really have to explore before they meet them.  Overall, I'd like to give an atmosphere of mystery and fear: What is this labyrinth under the city?  Who or what has been here and what were they doing?  Why is the local citizenry afraid to explore their basements too much?
Posted by Nadav at 06:34