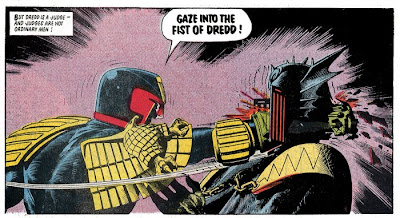 So my friend A. and I ran a friendly little playtest match of Fight Club by email.  It's fun.  Cyberpunk 2020 combat is strategic and fun.  Anyway, it got really out of hand really fast...

Smallish guy with inferiority complex
Fresh BJJ Bluebelt.  Goes to every competition in the area.  When he wins, he usually wins on points.
Wants to become the "Bruce Lee of BJJ" (whatever that means)
Body:4 Ref:8 CL:5 BTM:-1 SB:-1

I knew I was in trouble when I saw his character was also a grappler, with better Reflexes nonetheless. Well, I also rolled poorly and it was a fairly short fight, but pretty tense, with a lot of strategizing before each die roll...

It was fun and intense and strategically rich.  Still felt like CP2020 combat despite the rule changes.

I made a rule tweak that throws only do damage on a hard surface.

Besides that, there were the standard CP2020 problems:

I thought about how to improve the situation without breaking CP2020's general mechanic.  Cool could be made a little more important at he expense of body by making Stun Checks vs. Cool.  But, body makes sense too, since a big guy is going to be less effected by a little guy's punch.  That's a common problem when expanding CP2020: Which Stat to use for a particular check? Often times there are more than one stat that make sense, but you can only pick one of them, so I usually pick the one that I think has the stronger case.

Anyway, both characters were grapplers, so I'd like to see how other types would fare:
Posted by Billy at 22:24