CP2020's Martial Arts combat is built around 11 general techniques.  In this article I'll propose my own alternate set of 10 techniques for modern martial arts.  Unlike CP2020, martial level will be per-technique, not per art i.e. each technique is effectively a separate Skill.

The popularization of ground fighting due to Brazilian Jiu Jitsu has added a lot of techniques to the martial arts world, as well as a good deal of positioning strategy.

There are a number of positions your character can be in, and this determines both w
hat techniques can be used and with what chance of success/effectiveness.

During his turn, a character uses his action to attempt to change positions.

There two types of strikes and two types of submissions.  Note that head strikes/kicks against an opponent wearing an open helmet have a 50% of hitting the helmet(modified location chart below) and thus having their damage reduced.

These are usually used reactively, without using-up a character's turn, to counter techniques in 1.2, 1.3 above as specified.  If the character focuses on defence and doesn't do any other action, then he can get an additional +5 to his defence roll.  There are two types. 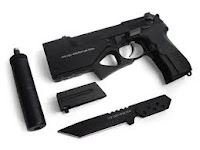 That's it for Techniques.  Next time... Advancement!
Posted by Billy at 03:00