Continuing from the last post on an modernized martial arts system for CP2020.

CP2020 has a rather complex system for advancement in Martial Arts.  Each individual Art has a difficulty level to determine how much XP you need to advance in it, and a bonus it gives for Key Attacks.

Due to today's more cross-training approach, I'm going to say that characters improve a particular technique rather than an art. Since this makes martial arts a bit more expensive, we'll say that 1 skill point buys you 3 martial arts skill points(to be divided between 3 different martial arts skills).  I'm also going to do away with the art-specific bonuses.

This requires 10*10/3=33.3 skill points to max-out all martial arts skills, which seems like a reasonably high-enough number since characters will generally want to specialize rather than max-out(in CP2020, you begin with 40+INT+REF skill points, so around 50)

So for example if I created a martial artist character, and I wanted to put 15 skill points into martial skills, I would have 45 martial arts skill points to distribute between the 10 martial skills.  So let's say this guy's a pro-boxer, but has trained Brazilian Jiu Jitsu on the side in hope of transitioning to MMA:

One side effect is that whatever Martial Arts you studied is no longer your skill, it's now your back-story to explain your martial skills. 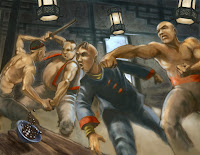 Another is that the Brawling skill is no longer relevant.  If you want to make a Brawler, who has learned to fight on the street, just spend 7 skill points on 21 martial arts skill points.