So, looking back on a recent WFRP session I ran.  This was set-up to be a seriously epic-battle.  Lots of mutants, about to overrun Mother Brain's waning forces and the PCs have a chance to turn the tide. But it didn't turn out that way and I want to think about why... 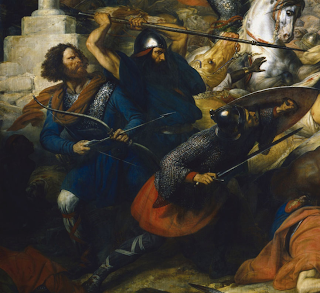 I had assumed that the party might succeed against the mutants at first, but that eventually their superior numbers would drive the party back into hiding within the caves.  This was not the case.  The party were mechanically better than the mutants, and they employed a number of tactical methods for furthering their advantage.

My plan to counter this consisted of the following:


Both sides stuck to their plans, and Mutant groups 4, 5 did indeed achieve their objective, but much to my chagrin, groups 1, 2, and 3 got slaughtered without putting up much of a fight.  This made for a long, but not particularly interesting battle. 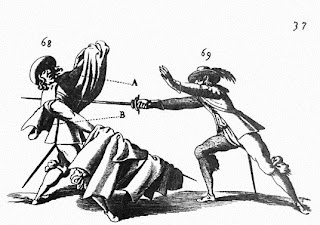 What makes an interesting battle?  One side makes a move.  The other side adjusts to counter the move. So the first group changes to a different tactic.  Their opponents respond in turn.  i.e. it's the chess game, the tactic and counter tactic, changing as the battle progresses that really makes things interesting.

So here are some potential tactics, in retrospect, that the mutants might have used to give the PCs a run for their money and made the battle a bit more dynamic and interesting.

Make them Flee Without a Fight

Rather than having mutant groups 1, 2, and 3 attack outright, I could have had them wait for 4 and 5.  At the same time, the mutants would taunt the PCs to try and intimidate them with their numbers.  If this didn't work, the mutants could also bluff and pretend they have some secret plan, like if they would start carrying timbers to the position above the PCs on the crater rim and start making a lot of noise and hamming, so that the PCs would think they are up to something and flee into the tunnels.


WFRP has a rule that if you fire into a group of tightly-packed opponents they you can use double your Ballistics Skill and determine the target randomly.  The mutants were spread out widely and had many short-bows among their ranks, so they could possibly have used this rule to chase the party out of their tightly-packed formation in the passage.

In the initial ambush, the mutants were up above the crater's edge and the party was down below.  Also in the larger engagement, the mutants could have sent a party around to take up that same position.  Now I gave the party a 10% to hit the mutants up there, but I think I could have made it -20% according to the Target in Hard Cover Rule.

Also, rather than having some of the mutants scramble down the cliff to engage the party, the mutants with no ranged weapons could have thrown rocks or even rolled down boulders onto the party.  A good sized boulder(+5) has the potential to harm the toughest dwarf.

And if party members tried to climb up to the mutants, they could be attacked with a +20% WS(major advantage of ground).

Flank Rather than Charge

Instead of giving the party's archers several rounds of free shots on their charging opponents, I could have had a group of mutants go around and flank the cave entrance via the cliffs above.  That way the melee would start from close and the party wouldn't get all of those free shots to reduce the mutants' ranks.

Similarly, the flying beast man could have flown high enough so as not to give the party's archer an angle on him until he swooped down to engage them.

And finally, when the moving mutants engaged the static party, the DM could have remembered to use the charging rule and give them +10% to hit.