The Dweller in the Gulf 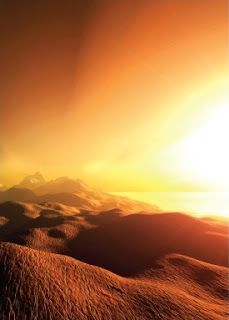 The trio of earthmen, hard-bitten adventurers who disdained the services of Martian guides, had started five days before from the outpost of Ahoom, into the uninhabited region called the Chaur. Here, in the beds of great rivers that had not flowed for cycles, it was rumored that the pale, platinum-like gold of Mars could be found lying in heaps, like so much salt. If fortune were propitious, their years of somewhat unwilling exile on the red planet would soon be at an end. They had been warned against the Chaur, and had heard some queer tales in Ahoom regarding the reasons why former prospectors had not returned. But danger, no matter how dire or exotic, was merely a part of their daily routine. With a fair chance of unlimited gold at the journey's end they would have gone down through Hinnom.


That from Clark Ashton Smith's "The Dweller in the Gulf".  Sounds like a setup for a DnD game if I ever heard one: a rag-tag band of adventurers, following vague rumors to the hazardous edge of civilization...
Posted by Billy at 23:17