The battle to protect Mother-Brain's realm from the mutants, that was set-up in session 7, ended up taking the whole of session 8.  I printed out a map of the crater in advance to show a high-level view of the battlefield, and also pulled out my Flip-Mat for the zoomed-in view of the party's location.

The encounter started as the party looked across the crater(P) and saw two groups of mutants(M1,M2), each fighting a security robot.  The robots were in the process of disengaging, presumably to recharge their weapons. 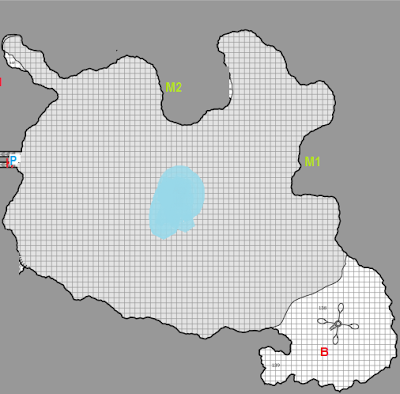 
The party decided to run and engage the closer mutants(M2), but as soon as they left the passage and entered the crater, they were ambushed.  A third group of mutants(4 mutants led by a Beast-Man) was on the edge of the crater above them and began firing short bows and spitting acid down on them. 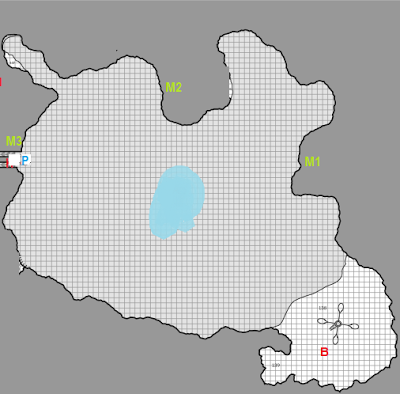 After defeating the ambushers and chasing-off the survivers, the party decided to bunker-down inside the passage and wait for the invaders.  Maria and Grim took the front rank, with the elves, the wizard, and the pharmacist taking cover behind. 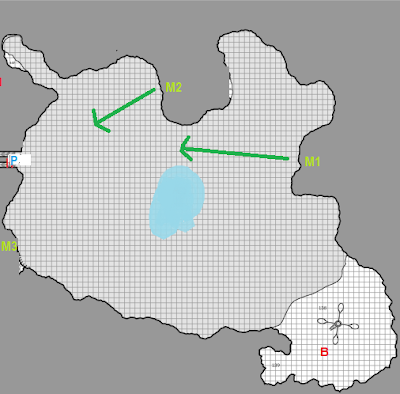 The two groups of mutants, as well as the surviving ambushers(M1,M2,M3) made a coordinated attack on the party.  They numbered 14 mutants and 2 beast-men.  Meanwhile, two other groups of mutants(M4, M5) showed up on the edge of the crater. 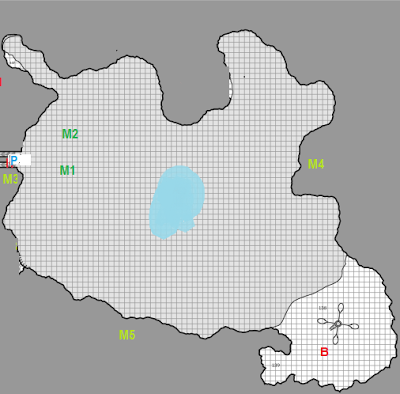 
Seeing the cramped melee going on in the main entrance to Mother Brain's realm, the rest of the mutants(M4, M5) disappeared into another cave to the South.  The party had seen this cave at the start of the encounter, but do not know where it leads. 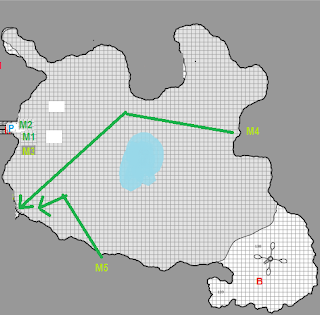 In the end, the party's tactics paid-off.  At the end of the battle they had killed 3 Beastmen and 14 Mutants.  However, they did not manage to keep the invaders out of Mother-Brain's realm, since 2 Beastmen and 11 mutants entered the cave to the South.  Nevertheless, the party was elated, and they managed to restock their supply of arrows, as well as take from the mutants a good deal of Blue-Metal salvage and even a laser rifle, apparently John's from session 3.  Of course he won't be needing it any more, since the rocket launch blew his house to smithereens.

Overall it was an exciting session, although I was a bit disappointed that the battle took so long.  Ultimately, WFRP has a heavier rule-set than DnD, so things take a bit longer.
Posted by Billy at 23:17