Session 10 picked up with the PC's fleeing Bogenhafen as passengers on a boat.  The decision was made to head to Weissbrook where "Drugs" could train as an Alchemist's Apprentice.

Quite fortuitously, the party came upon a riverboat that had just been captured by mutants.
The party defeated the mutants and took over the boat.  Seigwart had been learning Sailing and Riverlore so he took the helm until Weisbrook.  The lone survivor from the boat gave testimony that the boat was salvage, so that party can keep it unless the heirs make a claim on it. 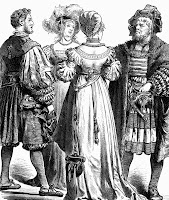 In Weissbrook the local Alchemist's house was empty except for her terrified niece and a threatening note, with a symbol associated with Scaven.  After some quick detective work questioning the locals, the party found their way to an abandoned barn.

Siegwart knocked the sentry out cold with his brass knuckles, while the Elf archer shot the dagger from the hand of the hooligan threatening the alchemist.  The third scoundrel got away, but the party had earned the alchemist's trust enough for her to take "Drugs" as an apprentice.

Some guys wearing purple made some weird sign to Seigwart and left an ink stamp on his hand.

The session ended with an uneventful trip to the big city of Altdorf.  There the elves sought training and Seigwart and the dwarves ambushed a pair of purple-wearing knaves tailing them around town.  The knaves managed to give the party the slip, but they left a mysterious note.
Posted by Billy at 03:35