Wow.  This post got way too long, way too fast.  So this will be the first part of a series.  Gygax had his Polearms, I have my Martial Arts...

So let's start with the problem: 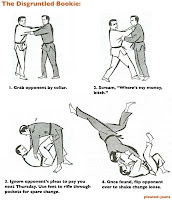 When I was running Polish Resistance with CP2020 rules, we were dissatisfied with the martial arts rules.  Bottom line, CP2020's fights just didn't seem realistic.


So you have to ask: How did CP2020, a game which LOOOVES martial arts, get it so wrong?

The answer is, to a large degree, due to how martial arts and our perception of martial arts have changed since the game's publication in the late 80's.

How Martial Arts Have Changed

The advent of Mixed Martial Arts competition, popularized with the advent of the UFC in 1993, has led to a lot more cross-over in the Martial Arts World.  Specific schools borrow from each other much more, you have MMA schools which don't even attempt to focus on a single style, and martial artists cross-train multiple arts to a large degree.  In short, the trope of going to live in a Shaolin temple and learning the 7 super-secret strikes of death is no longer culturally relevant.  Now it's all about breadth.

How Our Perception of Martial Arts Has Changed

This really get's at the heart of the matter.  When CP2020 was published in the 80's, we only knew what high-level martial arts looked like from from the movies. Today, due to the proliferation of martial arts training and cheap electronic video cameras, we know what it looks like from actual fight footage.  For example, take a look at Bruce Lee's fight in a Karate Studio, versus this recent fight in Wandrelai Silva's gym.

To name a few of the things we have learned since then:

So in subsequent posts I'll describe an alternate system for CP2020 Martial Arts which is a better fit for today's updated outlook...