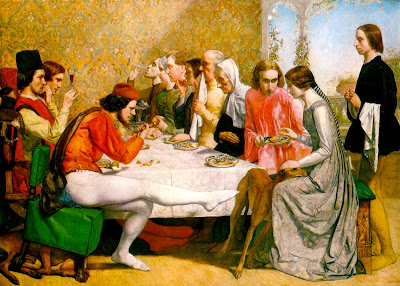 Lucas the Limber(front-left with the red cap) is a legendary thief and con-artist, operating in the Principality of Randstad.  He often mixes with the wealthy upper-classes, posing as a visiting dignitary or long-lost relative of some lesser-noble.

The one smudge on an otherwise successful career, was an incident that occurred several years back, in the very heart of the Temple of the dog god Canidon in the city of  Rutterdam. Lucas was caught red-handed while forcing entry to the vestibule of the High-Priest, by His Grace himself.  The priest, being somewhat amused by the smart young thief, was merciful and decided to forgo the usual punishment for sacrilege: being thrown in a pit of hungry wolves. Instead, hoping to draw the young man towards a greater reverence of Canidon, he merely cursed Lucas. Due to the curse, whenever Lucas ceases to touch or at least to rest some of his weight on a dog, he becomes clumsy and loses his considerable thieving ability.

But Lucas bounced back rather quickly from this awkward career setback.  He can now be found, once again, up to his old antics.  But now he is always accompanied by his two faithful greyhounds, Canis and Antigone.  He is very careful to always be in contact with one or both of them, so as to ply his trade.

He has become quite proficient at this, as in the the picture above, where he has, completely undetected, just purloined the golden codpiece from Count Lucifer Everdingin(seated next to him, wearing a black cap).  Note that he is dextrously putting some of his weight down on one of his hounds via his chair, while he touches the other with his extended leg. Certainly a young man of unique talent and endless adaptivity.

When Not Touching a Dog
Level 0 Fighter
Dex 3
Posted by Nadav at 02:57