Some good discussions going on at Monsters and Manuals about sandboxes and GM preparation. 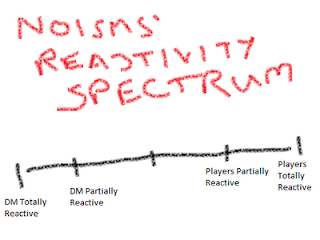 Is it a Sandbox?

Upon reading the post, I was a bit confused about what noisms is calling a sandbox.  On one hand he says:

"At the extreme left are the most sandboxy sandbox games"

On the other hand he says:


"The Samurai Sandbox leans towards the right."

and in the comments:


So which is it?  Do sandboxes tend to be on the left-side of the spectrum or can they also be on the right?  The answer lies in this line:


"A superhero game would tend to be more towards the right, even if notionally it is "sandboxy" and there is no predetermined plot or end point"

The point is that noisms defines a sandbox as an open-ended game. The whole spectrum can have games which conform to this definition, but some conform to it more than others. The superhero game is a sandbox due to lack of predetermined plot/endpoint, but the plot is more deterministic from the DM's perspective, than a hex-crawl type sandbox game.

Another interesting quote from the article:

Note that Noisms' definition of a Sandbox is basically the inverse of a railroad, which does have predetermined plot/endpoints.  My question is, according to his rather inclusive definition of a sandbox, is there some middle-ground where a game is neither a Sandbox or a Railroad?

Like if I as a DM say, "I'm running module T1 for you", it's not quite a railroad, but the player choices are quite limited to within the module.  I think that according to Noisms' definition of sandbox, it would not be considered a sandbox, because a sandbox let's the players make the big-decisions, whereas here it has been made for them already.